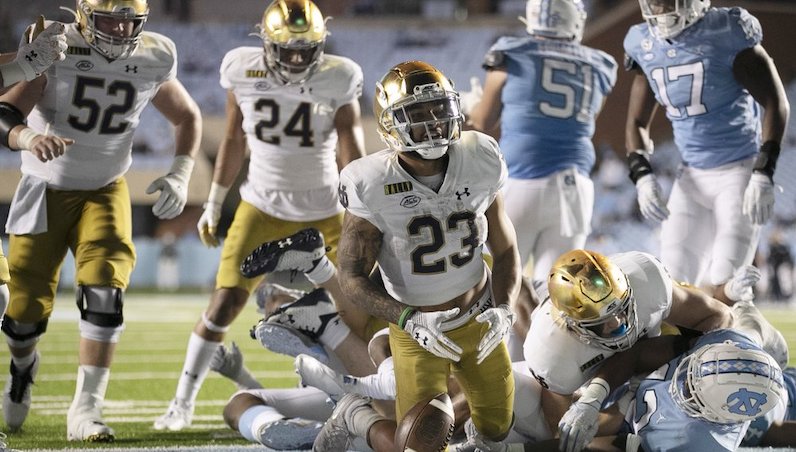 As the calendar gets set to flip over to December, we’ve entered the homestretch for college football. Conference title games are right around the corner. With that in mind, let’s get moving on this week’s ACC Football Power Rankings.

Behind a strong second half in Chapel Hill, Notre Dame — No. 2 in the CFP rankings — handled its business on the road.

Kyren Williams ran the show, once again: 23 carries for 124 yards and two rushing touchdowns. Williams hauled in his first touchdown catch of the season, too. This marks the fifth multi-touchdown game of the year for the star back.

ND Kyren Williams I see you hit em with “The Silencer” to close out this game! 🙏🏾💪🏾👑

It’s been a weird few weeks for the Clemson Tigers; however, with Trevor Lawrence back for the first time since mid-October, things looked right as rain against Pittsburgh. Lawrence threw for 403 yards (10.9 yards per attempt) and two touchdowns.

Trevor Lawrence ran the flea-flicker from the paw and got 6️⃣ 👀 pic.twitter.com/GTMjenIt1s

Hi, Hurricanes. See you in Durham next weekend, I guess.

Going down in defeat, North Carolina’s ground game was swallowed up by Notre Dame’s defense. The Tar Heels ran for a season-low 87 yards — with an average of only 2.9 yards per carry.

It wasn’t pretty at times; turnovers nearly proved costly. However, NC State managed to get a tough win on the road against Syracuse — behind four touchdown passes from Bailey Hockman, three of which went to Thayer Thomas.

#PackFact: Thayer Thomas is the first Wolfpack player with 3 receiving TDs in a game since @JaySam1k also had 3 in the 2016 bowl win over Vanderbilt.

Wake Forest hasn’t won a game since the end of October. The Demon Deacons will also have had a full month in between games when they take the field next. Weird season.

Boston College fought through injuries to grab a home win over Malik Cunningham and Louisville. It’s victory No. 6 on the season for the Eagles.

Hafley said that Jurkovec's X-Ray came back clear and that he called Bailey this morning, who said he was "feeling good."

"I'm pretty optimistic at this point so we'll see what happens."

Never forget: this was the most wonderful play of the 2020 ACC football season.

Well that was interesting. Virginia calls for a double pass out of its own end zone and Lindell Stone is trapped for a safety. It's UVA 49, Abilene 15 with 34 seconds to go and only the betting public gives a damn at this point.

When you’re staring down a three-game losing slide, the last thing you want to see is a Trevor Lawrence-led Clemson team coming to town. Buckle up.

Clemson halted a two-game winning streak for Pittsburgh, but the Panthers will have a chance to pull out a winning regular season two Thursdays from now.

It’s been a tough season for Louisville, one that’s fallen below preseason expectations. But Malik Cunningham has been pretty awesome. Ranked No. 3 in QBR among ACC quarterbacks, Cunningham put up big numbers against BC: 294 passing yards and two touchdown passes. Cunningham ran for 133 yards, too.

Malik Cunningham finished with a career high in total offense, accounting for 427 yards at BC (294 pass, 133 rush).

Folks, we’ve been saying it all year: Jahmyr Gibbs is very good at football. During the win over Duke, Gibbs and the rest of Georgia Tech’s backfield took over. Gibbs accounted for 139 yards from scrimmage and two touchdowns — on 10 touches. Jordan Mason ran for 105 yards, while Dontae Smith sprinted in for two fourth quarter touchdowns as well.

Along with giving up 56 points in back-to-back games, Duke’s defense also allowed 370+ rushing yards to both UNC and Georgia Tech.

Remember all those winless and one win seasons for Duke? This is the first time Duke has given up 56 or more in back-to-back games … EVER

Completion of this section has been postponed, too.

Next up: Virginia, TBA

Let’s make an amendment: *this* was the most wonderful play that happened in the ACC this season.

Syracuse QB Rex Culpepper, needing a TD to tie the game…goes for the 2 for 1 idiot special: he takes a sack on 3rd down without any timeouts, then spikes the ball to stop the clock…on 4th down. pic.twitter.com/UUHdeSYlac