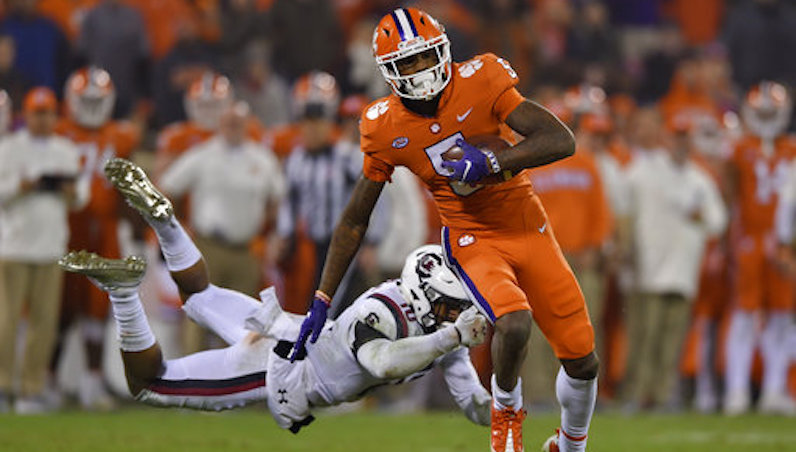 Other than a few bits and pieces (NC State and Virginia Tech), the ACC football regular season has come to its conclusion. In Charlotte, the table is set for Clemson and Pittsburgh. Can Clemson win its fourth straight ACC football title? We will see in a few days.

Before that, though, let’s check out the final ACC Football Power Rankings of the 2018 regular season.

For the fourth time this season, Travis Etienne ran for 150 yards and two touchdowns in a game — Clemson’s 56-35 win over South Carolina. Etienne is the only ACC player to hit this benchmark multiple times in 2018.

The ACC leaders in highest passer rating when targeted through the regular season pic.twitter.com/QZAJALB2fO

Next up: Pittsburgh (ACC Championship Game)

Eric Dungey keeps doing his thing. After Saturday’s win over Boston College (362 passing yards, six total touchdowns for Dungey), the veteran quarterback is now one of only two FBS players with 2,500 passing yards and 700 rushing yards this season. The other: Oklahoma’s Kyler Murray.

It wasn’t pretty, but NC State won its third straight game over UNC; it was also the third straight victory for the Pack in Chapel Hill. Senior running back Reggie Gallaspy II ran for 129 yards and five touchdowns, which tied a program record.

Next up: East Carolina

Well, that didn’t go so great (10 penalties for 100 yards) on the road against Miami, yeah? The Panthers now head into the ACC title bout as 24-point underdogs against Clemson.

Next up: Clemson (ACC Championship Game)

The loss to Syracuse was the third straight defeat for Boston College, which finishes the regular season at 7-5. On defense, the Eagles gave up 564 yards; that’s the most total yards BC has allowed this season. Only twice under Steve Addazio has Boston College allowed more total yards in a game.

Miami’s defense dominated — 200 total yards allowed, only three points, six sacks — which helped offset a rough performance from N’Kosi Perry. The young quarterback went just 6-of-24 through the air for 52 yards. Going back to the 2000 season, Perry is one of only 13 ACC quarterbacks to attempt at least 20 passes and throw for under 60 yards in a game.

This year’s matchup with Georgia was a disaster recipe for the Yellow Jackets. UGA jumped out to a 14-0 lead, which makes the mechanics tough for Georgia Tech and its run-heavy offense. Georgia Tech ran for a paltry 128 yards on the ground; that’s one of the worst rushing performances under Paul Johnson, and the first time since September 2016 that the Jackets have run for under 130 in a game.

After Saturday’s semi-stunning loss to Virginia Tech, Virginia has now dropped 15 straight to its key in-state rival. UVA hasn’t defeated Tech since 2003; it’s been even longer since the Cavaliers came away victorious in Blacksburg — 1998. Over the last three weeks, though, Joe Reed has continued to evolve as a playmaker: eight receptions, 217 yards and five touchdowns.

Virginia Tech extended its season for at least one more week with a thrilling overtime victory on its home field. Tech heads into this weekend’s game against Marshall as a 4.5-point favorite; a win would give the Hokies six victories for the season and bowl eligibility.

This was an absolutely overwhelming performance from Wake Forest in its 59-7 victory over Duke on Saturday. Jamie Newman was great, too. Dating back to the 2000 season, this is Wake’s only ACC victory of 50+ points.

Duke turned the ball over four times and recorded just 251 yards of total offense against Wake Forest, but this game was a total swing-and-miss from the Blue Devils. It’s basketball season, though, so there’s that.

Stop me if you’ve heard this one before: Florida State failed to protect Deondre Francois (five sacks allowed) and lost, falling to Florida 41-14. The Seminoles fall to 5-7 and will miss a bowl game for the first time since 1981.

UNC fought hard in the finale of the Larry Fedora era, but in the end the Tar Heels couldn’t quite get the win over the rival Wolfpac—BAH GAWD, THAT’S MACK BROWN’S MUSIC!

Looks like it’s time to plan out a fun offseason trip, you guys. Or get started on a coaching search. One of the two.