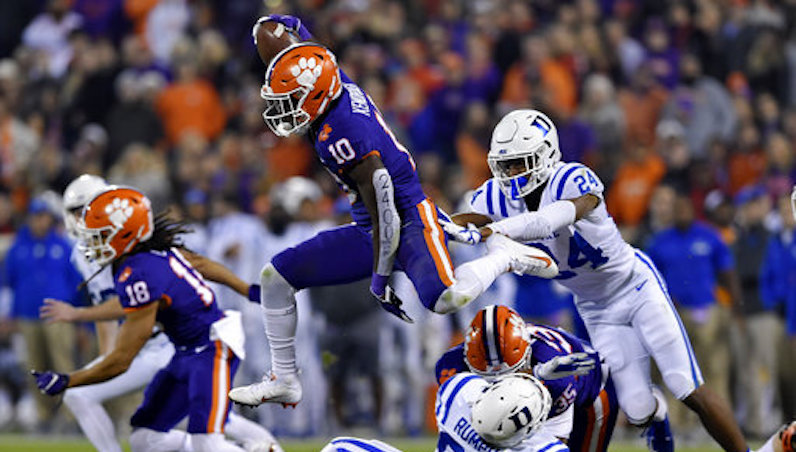 Clemson's Derion Kendrick (10) returns a kickoff while defended by Duke's Chris Rumph ll (96) and Jarrett Garner during the first half of an NCAA college football game against Duke Saturday, Nov. 17, 2018, in Clemson, S.C. (AP Photo/Richard Shiro)

As the ACC football year moves to the penultimate week of the regular season, let’s take a look at this week’s ACC Football Power Rankings. The list is topped by the two teams that will square off in two weeks for the ACC title: Clemson and Pittsburgh. From there on down, though, it’s a bit of a maze.

(Clemson and Pitt will play in Charlotte on Dec. 1. Kickoff is set for 8 p.m.)

Duke hung tough with Clemson for a half, but Travis Etienne was the different in the final 30 minutes — two touchdown of 25+ yards. Going back to the 2000 season, only one ACC back has rush for over 1,110 yards and 15 touchdown while averaging at least seven yards per carry: Dalvin Cook (2015). Etienne is in line to do just that: 1,158 yards, 17 touchdowns, 8.5 yards per carry.

Next up: South Carolina

We have our ACC Football Championship Game set — just like we all expected, right? With its ground game mostly held in check against Wake Forest, Pitt went to the air; Kenny Pickett delivered. The sophomore quarterback threw for a career-high 316 yards and three touchdowns. For the first time since 2016, Pitt is back in the AP Top 25, too.

Pittsburgh has clinched the ACC Coastal and will face Clemson in the ACC Championship Game.

The Panthers will be the 6th different team in the last 6 seasons to represent the Coastal in the ACC Championship Game. pic.twitter.com/3gsVKS4oGa

So, yeah. That didn’t go so great against Notre Dame, huh? The Orange lost 36-3; it was just the second time since Dino Babers took over that Syracuse has failed to score a touchdown.

Louisville struck first, but after that first field goal for the Cardinals, an avalanche ensued. In the 17th 300-yard passing game of his career, Ryan Finley hit four different receivers for touchdown passes, including his go-to guy, Kelvin Harmon.

Ryan Finley was lights out when kept clean from pressure against Louisville pic.twitter.com/6hi9LOBHLT

Harmon caught seven ball for 100 yards. This was the 13th 100-yard receiving game for Harmon during his three seasons in Raleigh.

Nice shoutout by Kelvin Harmon to Steph Louis, crediting the senior mentor with helping him reach the 1,000-yard mark for the second straight year.

It took overtime and four field goals for Georgia Tech to get its seventh win of the season — a 30-27 victory over Virginia. After TaQuon Marshall’s 1-of-8 passing performance, Tech is now undefeated (3-0) in games this season when its completed one or fewer passes. Football is a weird game, man.

Next up: at Georgia

A fourth comeback from Florida State derailed what could’ve been Boston College’s eighth win of the 2018 season. AJ Dillon didn’t look quite himself against FSU, but he still carried the ball 37 times for 116 yards and two touchdowns. Dillon has now carried the ball 30+ times in seven of his 21 games at BC.

That had to be a frustrating loss for the Cavaliers; however, UVA can turn its fortunes around on a short week — at Virginia Tech on Friday. Virginia hasn’t defeated its in-state rival since 2003, but the Hoos are favored to win, for the first time since 2014.

In its first matchup with Clemson since 2012, Duke struggled offensively. The Blue Devils didn’t turn the ball over, which is good, but mustered just 262 yards of total offense (3.3 yards per play); Daniel Jones averaged only 3.7 yards per pass attempt. (Breaking news: Clemson’s defense is excellent.)

The win over Virginia Tech wasn’t exactly a sharp performance for Miami (11 penalties), but the Hurricanes — behind N’Kosi Perry (three total touchdowns) and its defense (three turnovers) — got the job done.

It’s been a tough debut season for Willie Taggart, but FSU went on the road and got its best win of 2018 over Boston College. Florida State’s defense had some nice moments, especially in leverage situations against the Eagles.

Wake Forest had a long week to prepare for its home contest against Pitt, but the Demon Deacons just couldn’t get online in this game. The defense did well against Pitt’s ground game, but Jamie Newman struggled (50 percent completion rate, two interceptions) and the offense managed to gain just 285 total yards.

Boy, this really has been a depressing campaign. Derailed with injuries, the Hokies have slumped for two months now. After the UNC win, Tech has lost four straight and has resorted to adding — potentially — another game to its 2018 schedule (Marshall) to keep its bowl streak in line.

#Hokies agree to 2-for-1 deal with Marshall. Will pay $300,000 for Dec. 1 game, if it's played. Becomes a home-&-home if it's not. Win-win for both schools. Marshall gets future games and Tech administration delivers opportunity for team to win sixth game. https://t.co/qaDlsIJYWv

In the win over Western Carolina, UNC had its best offensive game of the season: 654 total yards (8.4 yards per play, seven touchdowns, 30 first downs. All of those numbers are high water-marks for this season. Can that carry over against the Wolfpack, though?

Good job, Good effort? Um, at least Lamar Jackson played well this weekend for the Ravens? Eh…here’s a video of cats to make you feel better

AP Top 25 Poll: Pitt joins the party, Clemson locked in at No. 2