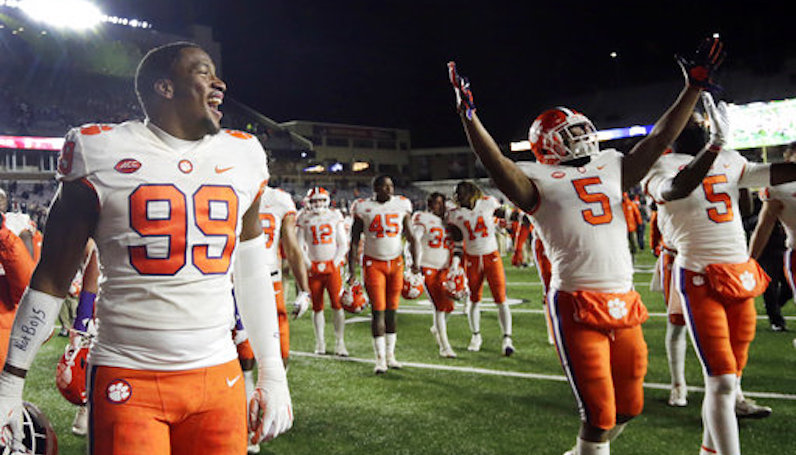 Another week down, another batch of ACC Football Power Rankings — Week 11 style. The middle of this league is a total logjam but, once again: Clemson is awesome. This team can win on the road, in different forms of weather and with different playing styles. The Tigers are stacked and ready for another ticket to the CFP, assuming they can avoid an obvious PITTfall, if you know what I mean.

Clemson has shown the ability to win games in a variety of ways this season; against Boston College, the defense flexed its muscles — with some timely help from the special teams. The Tigers didn’t force any turnovers, but sacked BC quarterbacks on four occasions (36 now for the season, tops in the ACC), recorded 10 tackles for loss and held A.J. Dillon to just 2.4 yards per carry.

Say hello to your new Coastal Division overlords, the Pitt Panthers. Pitt played arguably it’s best game of the season on Saturday — a 30-point thrashing of Virginia Tech. The Panthers ran wild on the Hokies; led by Darrin Hall and Qadree Ollison (421 combined rushing yards, four touchdowns), Pitt bagged 654 yards in total offense, including 492 rushing — the fifth most by an ACC team since the 2000 season.

Syracuse has won four straight games, scoring 40+ points in every game, and winning the three most recent games — NC State, Wake Forest and Louisville — by double digits. This week is a big one for the Orange: Inside of a baseball stadium, an Dino Babers ruin Notre Dame’s playoff hopes? Ian Book will be back, too.

After a bizarro Thursday night loss in Raleigh to Wake Forest, gets just what the doctor ordered: a matchup with Louisville. NC State, if it can win out, still has a shot at 10 wins in 2018. That’s something to play for. Before that, let’s check in on their fans.

Boston College fought hard against Clemson, but didn’t have anywhere close to enough firepower on offense to make a second-half push. The Tigers held A.J.Dillon to just 39 yards on the ground, the third fewest of his career. Hopefully quarterback Anthony Brown — who left the Clemson game early with an upper-body injury — can recover.

Virginia didn’t put forth its best performance of the season in a 21-point victory over Liberty; however, the win was UVA’s seventh in 2018, and Bryce Perkins did his thing — two touchdown passes, two rushing touchdowns. According to Sports Reference, ACC quarterbacks have thrown two or more touchdown passes and run for at least two touchdowns in the same game just four times in 2018. Perkins accounts for two of those performances.

Saturday’s reclamation of the Victory Bell marked the third straight season that Duke has defeated North Carolina. It’s the first time in 30 years that Duke could make that claim; led by Steve Spurrier, the Blue Devils defeated the Tar Heels in three consecutive seasons (1987-89). Injuries be damned, this is a good football team.

After trailing early, Georgia Tech roared back to defend its home turf against Miami. Tech’s ground game faced resistance from Miami; Paul Johnson’s club ran for only 231 yards, its second fewest total in a game this season. The ACC’s leader in time of possession, Georgia Tech controlled the game as Miami’s offense continued to struggle.

Speaking of Miami, hey, how ’bout them Canes? Well, it’s not going so great. It’s the same song, different week: Miami has an outstanding defense and plenty of talent at the skill positions. However, it’s offense simply can’t get online. N’Kosi Perry threw for just 165 yards (on 23 attempts), and Travis Homer mustered a measly 2.7 yards per carry. At 5-5, Miami is close to missing a bowl game this season.

Dave Clawson has a lot to be proud of. His team, depleted with injuries and start its third-stringer at quarterback, rallied to score twice and upset NC State in Raleigh. Also, where’s the love for Greg Dortch (and Kelvin Harmon)?

Even with Ian Book out and a defense that forced two turnovers, Florida State got mauled by Notre Dame in South Bend. According to Sports Reference, Florida State has lost 17 games — going back to the 2000 season — by 21+ points. Four of those defeats have occurred this year, the most of any year.

The Pittsburgh loss won’t be an easy one to rebound from as this Virginia Tech season gets more and more challenging, dropping to 4-5. The last time the Hokies missed a bowl game was 1992, when Frank Beamer’s club went 2-8-1. It was the last season Beamer ever missed out on a bowl game.

Hey, at least the offense played pretty well again! Michael Carter had another nice game: 148 rushing yards and a touchdown — his third career game of at least 140 rushing yards.

Duke quarterback Daniel Jones torched the North Carolina defense on Saturday, setting a new record for the most yards a player has ever racked up on UNC in a single game. (@_jackfrederick) https://t.co/deEHCM6kUk