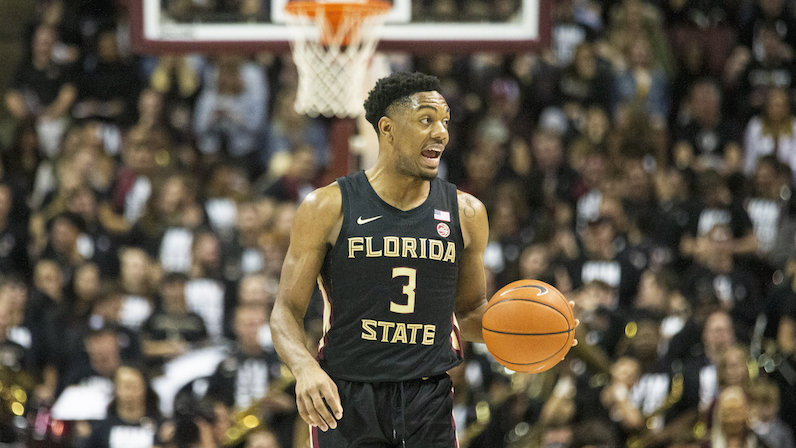 The tragic event that took place in California on Sunday, which claimed the life of basketball legend Kobe Bryant, his 13-year old daughter Gianna and seven other people, had me thinking about a lot of things over the weekend, including a famous line from an all-time basketball coach — the late, great Skip Prosser.

Prosser used to constantly remind his players, attendees of his basketball camp (like myself) and anyone else around him: “Never delay gratitude.” He was so right; life is fragile; nothing should be taken for granted. It shouldn’t require the sudden death of a famous person to remind us of these things, but don’t wait to tell your family members and friends that you love them and care about them. It’s worth it.

And with that, on to this week’s power rankings.

For just the fifth time all season, Florida State allowed an opponent to score better than one point per possession — in an 85-84 win over Notre Dame. The Irish scored 1.09 points per possession, which is the third highest total Leonard Hamilton’s club has allowed this season.

Even with some late-game struggles, and stud freshman Patrick Williams out (sprained toe), FSU still managed to pull out the win with a fine offensive performance — going 12-of-19 on 3-point attempts and 13-of-14 from the free throw line. Overall, Florida State scored 1.1 points per possession.

Last week was an interesting one for Louisville — with two games near the banks of the Ohio River. First, Louisville survived a scare against Georgia Tech; as Jordan Nwora struggled (1-of-7 2PA), the Cards nearly blew an 11-point lead with five minutes to play. The Yellow Jackets — with less than 90 seconds to play — even got within a point, after a James Banks dunk.

Over the weekend, though, Louisville took care of business against Clemson with a little more ease: 80-62. Led by Aamir Simms, Clemson entered Saturday relatively hot on offense; the Tigers had scored over one point per possession in four of their previous five games. But Louisville’s defense was up to the task — bothering Simms and hitting its assignments. (This was a seriously excellent performance when it comes to help defense.

This is a worthwhile experimentation for Louisville. Obviously, Enoch and Malik will combine for the 40 mins most nights, deservingly so, too. But this type of package (potentially) gives Chris Mack an added dimension, lineup combination.

After back-to-back losses to Clemson and Louisville, Duke landed on a nice opportunity to reset and reorganize. Last Tuesday, Duke hosted a depleted Miami squad as Tre Jones, once again, put the clamps on Chris Lykes (2-of-9 2PA, 1-of-4 3PA) — with help from Jordan Goldwire.

After the win, Duke gets a full week off before hosting Jeff Capel and Pitt this Tuesday; after that, the Blue Devils head to Syracuse this Saturday — the team’s first road game since the Clemson loss (Jan. 14).

Matthew Hurt continues to assemble a rather productive season: 22 points (4-of-7 3PA) against Miami. According to Synergy, Hurt is shooting 60 percent on post-ups (1.2 points per possession) and has an effective shooting rate of 65.1 percent on catch-and-shoot looks. Hurt ranks fifth in the ACC in catch-and-shoot efficiency (minimum 50 FGA).

(It feels a little strange to have this team ranked third. The Blue Devils are very good.)

Don’t look now: Syracuse has won five straight games. With Elijah Hughes and Joe Girard struggling — a combined 1-of-11 on 3-point attempts — Buddy Boeheim (21 points, 4-of-8 3PA) bolstered Syracuse’s offense just enough to get the win over Pittsburgh, 69-61. Boeheim now has 10 games with 4+ 3-pointers this season.

Buddy Boeheim has 18 to lead all scorers at halftime https://t.co/IwFCqIvj12 pic.twitter.com/maNLbWGpDD

The variety of scoring along the perimeter is nice for Syracuse, no doubt; however, the Orange came to play defensively over the weekend, too. Syracuse held Pitt to under 24 percent shooting on its 3-point looks and just 0.9 points per possession.

It took overtime for Virginia (5-4 ACC) to triumph over a depleted Wake Forest squad on Sunday. A win is a win, though; after losing three of its previous four games, including a nail-bitter last Monday to NC State, it was a necessity, too.

Keep an eye on Tomas Woldetensae, by the way. After splashing 7-of-14 3-point attempts in Winston-Salem, the junior wing is now shooting 40.4 from downtown in conference play. According to Synergy, Woldetensae is up to 51.5 percent effective shooting on catch-and-shoot attempts (65 FGA) this season as well.

Things remain challenging this week for UVA, though — with home games against Florida State and Clemson.

Outside of its power outage on the road against Virginia in early January — a 65-39 defeat — Saturday’s loss at Boston College was Virginia Tech’s worst offensive performance of the season: 0.86 points per possession.

While dealing with some injuries, NC State’s offense has posted some rough outings, recently. In three of their last five games, the Wolfpack have scored under 0.9 points per possession. With CJ Bryce held scoreless, NC State posted its second worst offensive performance of the season in the loss to Georgia Tech: 0.85 points per possession. (Yikes!)

Wolfpack coach Kevin Keatts is normally unflappable, even after a loss.

Notre Dame is famously turnover-averse under Mike Brey. On Saturday, though, the Irish were a little loose with the basketball — at least by their standards. Behind four steals from Trent Forrest (2.3 steals per 40 minutes this season), FSU forced 15 turnovers — a turnover rate of 19.5 percent. According to KenPom, that’s the third worst single-game turnover rate for Notre Dame this season.

Over the last three weeks (five games), Notre Dame has 1-4 record — with those four defeats coming by a total of 11 points. Last week, Notre Dame dropped consecutive games to Syracuse and Florida State by a combined three points.

In Clemson’s two most recent defeats, opponents (NC State and Louisville) did a solid job with help-side defense; this took away some of the backdoor and slip actions the Tigers used in wins over NC State, North Carolina and Duke.

It will be interesting to see how Clemson looks to attack Syracuse’s zone this week. So much of Clemson’s offensive firepower comes with Aamir Simms working the pick-and-pop (or slip) game and facilitating off those actions. Matched up with Syracuse’s zone, Simms can still function as an offensive hug; however, Brad Brownell may need to position his star in different locations.

Pittsburgh will enter Tuesday night’s matchup with Duke — a homecoming for Jeff Capel — as a serious underdog, which is a tough place to land, especially after the loss at Syracuse: 0.9 points per possession (5-of-21 3PA).

Duke coach Mike Krzyzewski on Jeff Capel's progress at Pittsburgh: "He's not developing a team. He's developing a program. You can see that in every aspect of what they're doing. … They're going in a really good direction."

During the win over the Wolfpack, Jose Alvarado become just the 12th player in the country this season to record eight or more steals in a game. Alvarado now ranks 58th nationally in steals rate, according to KenPom: 3.8 percent.

It’s been a turbulent 2019-20 season for UNC. The a 94-71 defeat of Miami, however, which went down as career win No. 880 for Roy Williams, showed the formula for success for this team. (That is until Cole Anthony returns.)

On Saturday, North Carolina hit the offensive glass and Brandon Robinson shook loose from beyond the arc. As a team, UNC rebounded 34.5 percent of its misses — 10 offensive rebounds. Armando Bacot and Garrison Brooks powered UNC’s interior offense, too, with Bacot going for 19 points, 12 rebounds, seven assists and two blocks.

Robinson splashed six 3-pointers and scored a career-best 29 points. According to Synergy, Robinson has scored 1.3 points per possession on spot-ups this season — No. 4 in the ACC (minimum 50+ possessions).

He passes former @UNC_Basketball head coach and mentor Dean Smith for the fourth-most Division I wins all time. pic.twitter.com/qjN9Vi1KLI

Boston College’s weekend victory over Virginia Tech marked the second time this season that BC has held an ACC foe to under 0.86 points per possession in a game. According to both KenPom and Bart Torvik’s site, the Eagles rank inside the top 100 nationally in adjusted defensive efficiency. As of right now, this team is on pace to be the best defense Jim Christian has had in Chestnut Hill.

If you’ve watched Miami play recently, you know just how strapped for…everything this team is right now. Since the calendar flipped to 2020, Miami has scored better than one point per possession just once (the win over Pitt) in seven games. In three of those seven games, including a loss at Duke, the Hurricanes failed to scored better than 0.85 points per possession.

Further complicating matters: in four of those seven games, Miami has allowed over 1.2 points per possession.

This team was already thin in terms of depth; however, without Chris Lykes and Kameron McGusty — who rank first and third, respectively, in terms of usage rate on the roster — at UNC, Miami was really swimming upstream.

Wake Forest fought hard on Sunday — without Brandon Childress and Chaundee Brown — nearly pulling off an upset of Virginia. However, Wake’s inability to get off a shot in the overtime of a two-point game, after calling a timeout, as the clock expired is…man.

Overall, the Demon Deacons are playing relatively good offensive basketball; Olivier Sarr (68.3 FG% at the rim) is a revelation, too. But once again, as has always been the case under Danny Manning, this team continues to struggle on the defensive end. Wake Forest ranks No. 150 in the country in adjusted defensive efficiency.