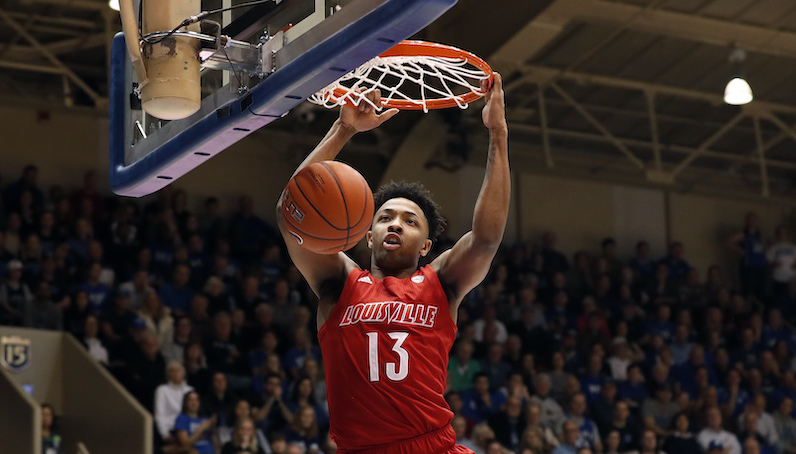 Busy times, busy times. Let’s get right to this week’s ACC Basketball Power Rankings, which feature a new team at the top of the list: Florida State.

Florida State’s defense just continues to get the job done. The win in Miami was Florida State’s ninth in a row and the team’s second overtime victory of the season. Powered by 15 steals and 10 blocks, FSU held Miami to 0.98 points per possession; so far this season, FSU has held every ACC opponent to one point per possession or fewer in all seven league game.

Devin Vassell led the charge, too: three steals and two blocks, officially. Through 18 games now, this marks the 12th time that Vassell — an ace 3-and-D prospect — has recorded a combined three or more blocks + steals (stocks) in a game.

Chris Mack entered Saturday’s primetime contest at Duke with a beautiful game plan — one designed to take advantage of the Blue Devils and their revved-up denial defense. It worked: Louisville, as a team, had its best shooting performance (54 eFG%) since the middle of December. Similar to the Kentucky game, Louisville targeted the backdoor, looking to cut in space behind Duke’s pressure-packed off-ball defense.

Overall, the Cardinals shot 21-of-35 on field goal attempts (60 FG%) at the rim, including nine dunks. Several of those looks came out of Louisville’s “Buckeye” action, including the layup above by David Johnson.

Out of a simple horns set, Louisville plays through Jordan Nwora at the elbow with some frequency. Going against man-to-man defenses, the Cards will deploy this initial action a couple times per game; however, that’s usually run to give Nwora an opportunity to run middle pick-and-roll. On Saturday, though, Louisville used this action (Horns Spurs) to spring Johnson for a backdoor bucket, off a rub screen from Nwora.

Louisville ran this exact same play during the win two Saturdays ago at Notre Dame. Tim Duncan and Tony Parker would be proud.

Johnson was a revelation for Louisville in the road win at Duke; the freshman guard finished with 19 points (3 dunks), including 17 in the first half, and seven assists. However, if you pay attention to this team, that performance didn’t come out of nowhere.

Back in the middle of December, I wrote on how Johnson — a dynamic, yet inconsistent blur with the basketball — gives Louisville another gear. Johnson likely won’t be able to summon the same type of effort he did against Duke every night; however, if he’s able to constantly unlock opposing defenses with his handle, it’s a real ceiling-raiser for Louisville

Duke’s armor took a couple hits as the Blue Devils lost back-to-back games for the first time in nearly two full calendar years. The Blue Devils have suffered just three losses on the season; in all three of those games, their opponent scored better than one point per possession. So far this season, Duke is 15-0 when it holds opponents under one point per possession.

Clemson posted an effective shooting rate of 64 percent against Duke; meanwhile, Louisville shot 50 percent on its 3-point looks in Cameron Indoor Stadium. In both games, though, Duke failed to protect the rim. Clemson, with Aamir Simms as its facilitator, and Louisville shot a combined 38-of-58 on attempts around the basket (65.5 FG%).

Something to keep an eye on: the Tigers and Cardinals both took advantage of Duke’s overplay efforts on the perimeter. How will Duke adjust if this happens again?

Virginia was able to shrug off a close midweek loss to Florida State with a weekend road win at Georgia Tech. Led by Jay Huff, Virginia shot 54.1 percent on its 2-point looks and assisted on 68 percent of its field goals.

Virginia finished the game with 32 points in the paint and 10 second-chance points.

With a return to the lineup from CJ Bryce, NC State went 2-0 last week — sparked with wins over two top-100 KenPom teams: Miami and Clemson.

During the victory over Miami, NC State scored a season-high 1.24 points per possession. The addition of Bryce was a major boon, too; with another playmaker on the floor — someone aside from Markell Johnson that can initiate offense — the Pack looked dynamic at times.

It’s a relief for Johnson when, halfway through a possession, he can flip the ball to Bryce and NC State races into secondary offense with a side ball screen for Bryce.

Also of note: DJ Funderburk is playing excellent basketball. Over the last eight games, Funderburk has averaged 16 points and 7.8 rebounds per game, while shooting 69.2 percent on 2-point attempts.

According to Synergy Sports, Funderburk is shooting 90 percent on pick-and-rolls, 62.5 percent on post-ups and 66.7 percent on put-back attempts. During the wins over Miami and Clemson, though, it was Funderburk’s defense that really stood out.

While matched up with Miami, Funderburk served as a switch defender on Chris Lykes, a shifty pick-and-roll menace who is over a foot shorter than Funderburk. Miami assisted on just three of its 20 field goals in that game.

And then on Saturday, Funderburk served as the primary defender for the red-hot Aamir Simms. Early on, Simms got loose for some buckets — mostly working the pick-and-pop and attacking closeouts against Manny Bates. But Funderburk closed that off, along with some serious help from NC State’s weak-side defenders.

The two-point home loss to Syracuse, which snapped a three-game win streak, is a tough pill to swallow for the Hokies. Virginia Tech still did a lot right in this game. With Nahiem Alleyne (5-of-6 3PA) setting the pace, Virginia Tech drained 15-of-37 3-point attempts (40.5 3P%). The Hokies also assisted on 22 of 25 field goals — an assist rate of 88 percent, which is ridiculous.

Virginia Tech scored 1.09 points per possession against Syracuse, which is actually the best mark the Hokies have posted in a league game this season, so far.

Mike Young’s club will have a chance to rebound this week when Virginia Tech — one of the top 3-point shooting teams in the country — hosts UNC, which, um, isn’t quite so good at defender the 3-point arc.

Have yourself a game, Buddy Boeheim. In a nail-biting win at Virginia Tech, the coach’s kid splashed five 3-pointers and scored 26 points, which ties a career high for Boeheim. The sophomore wing now has six games this season of 20+ points to go along with seven games of 10 or more 3-point attempts.

Pittsburgh has waited all season for the kind of performance Xavier Johnson threw down against North Carolina on Saturday. Along with his outing against Rutgers (20 points, 8 assists), this was as comfortable as Johnson has looked since his sophomore campaign launched.

While controlling the overall flow of the game, Johnson scored 20 points, got to the free throw line (10-of-12 FTA) and made plays when the opportunities were presented: six assists to only two turnovers.

NC State did a solid job defending Aamir Simms on Saturday — all things considered — but even with the extra defensive attention, Simms still did his thing: 18 points and 11 rebounds. Simms, however, was held to just one assist — a testament to the Pack’s defensive coverages against the Tigers.

That number is a notable deviation from the previous four games; Simms handed out 20 combined assists against Miami, NC State (the first game), UNC and Duke.

Regardless, Simms is still on an absolute heater right now. Over the last five games, Simms has averaged 20.2 points, 4.2 assists, 2.2 offensive rebounds, 1.2 steals and 1.2 blocks.

With his abilities to both stretch the floor (40 3P%), especially in Clemson’s pick-and-pop game, and thread canny passes between unsuspecting defenders, Simms has totally changed the dynamics of Clemson’s half-court offense.

Simms has emerged as one of the league’s most dynamic offensive fulcrums — while functioning as a small-ball center. (Simms has worked very nicely as a dribble handoff partner with Tevin Mack, too.)

Teams will adjust, as NC State did in Raleigh; however, Simms has plenty of tricks of his sleeve, and can score in isolation when asked.

Notre Dame is in the midst of a week-long break in between games; following the win over Georgia Tech, the Irish don’t put the short pants back on until this Wednesday against Syracuse.

Georgia Tech followed up the loss to Notre Dame with a bit of an offensive clunker against Virginia. While attempting a paltry nine free throws in this game (3-of-9 FTA), Georgia Tech also managed to turn the ball over on 29 percent of its possessions. Not great, Bob/Josh.

Chris Lykes can do some simply amazing stuff with the basketball in his hands; he’s a whiz when it comes to changing directions and creating space for his jumper. Even with two monster scoring performances from Lykes last week, though, Miami still went 0-2.

There’s so much pressure on Lykes and Kameron McGusty to create offense off the dribble for Miami; Lykes was a little turnover-prone in those games, too, as NC State and FSU loaded up on his ball-screen activity.

Next up: How will Wake Forest look to defend Aamir Simms on Tuesday?

After a fluky 3-1 start in ACC play, the Eagles have crashed back to Earth. Boston College has lost three straight games — all by 18 or more points. Over the last three games, Boston College — 33.7 FG% and 19.5 3P% in losses to Georgia Tech, Syracuse and Wake Forest — has been outscored by 73 points.

It’s been five weeks since short-handed BC scored better than one point per possession in a game.

What’s left to be said? This team isn’t very good. It’s a little hard to believe, but due to injuries, poor execution on both ends of the floor and a dire lack of perimeter shooting, the floor is incredibly low with this UNC team.

As of right now, so many things must go right for the Tar Heels to win a game. Even then, things can unravel, quickly, like they did against Clemson. Short of a return from Cole Anthony, it’s hard to see how things get better.