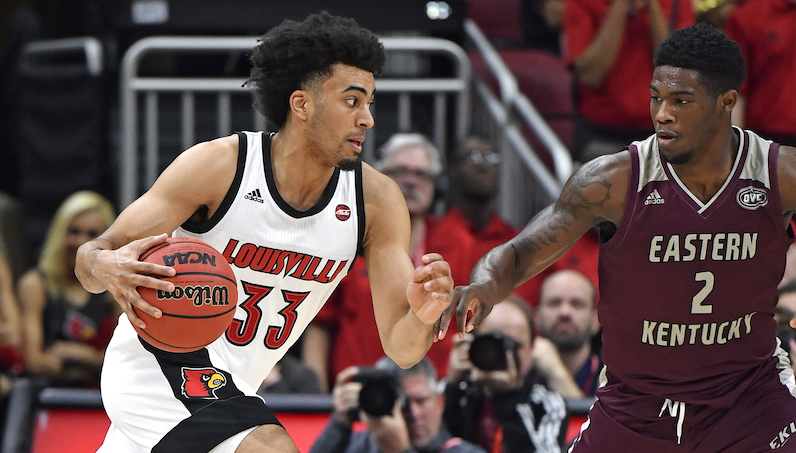 Even at a slower point of the basketball schedule — during exams, prior to full conference chaos — things are still hectic. In an effort to sort things out, here are this week’s ACC Basketball Power Rankings.

Prior to the start of the season, one of the biggest question marks in the ACC centered on the point guard position at Louisville: who would replace Christen Cunningham? For most of the season, that’s been Darius Perry, with contributions from Fresh Kimble; however, it’s worth keeping an eye on David Johnson.

The freshman guard has played just 47 minutes this season, but he has great size and athletic bounce. Johnson had turnover issues against Eastern Kentucky, but he handles the ball confidently, and he as the ability to collapse a defense with a strong drive.

In the second half against EKU, Chris Mack ran with a lineup of Johnson, Ryan McMahon, Jordan Nwora, Dwayne Sutton and Malik Williams. (Williams is playing excellent basketball at the moment, by the way.) In the span of 2.5 minutes (+6), that five-man unit scored 10 points on four possessions (2-of-3 3PA).

Johnson has the potential to be a game-changer for the Cardinals. Louisville has serious talent in the frontcourt, but — with the exception of Dwayne Sutton — those guys are mostly finishers. That’s especially true of Nwora and Steven Enoch.

Jordan Nwora is a great player, obviously, but he struggles when tasked with creating his own shot (or for others). Louisville runs good half-court offense that helps to generate efficient looks; transition offense plays a role here, too. However, at the risk of getting too far ahead, if Johnson can generate open shots simply off of his dribble, then he becomes an important ceiling-raiser for Louisville.

So far this season, Vernon Carey Jr. has been an absolute bull for Duke. The freshman big, who ranks 12th nationally in defensive rebound rate (30.3 percent), is one of three players in the country with a usage rate of 30 percent and an offensive rebound rate of 12 percent.

In the half court, Duke targets VCJ as much as possible — usually 1-5 pick-and-roll with Tre Jones or high-low action from a horns set.

Carey is built to run opponents over in the post, but there’s more to his interior offense. VCJ has quick feet and catches the ball ready to do damage. Carey can play above the rim, too, but if he’s able to drop that right shoulder, it’s all over.

Carey is also drawing fouls at an insane rate. According to KenPom, VCJ (76 FTA) draws 8.9 fouls per 40 minutes, which ranks No. 1 nationally. That’s a larger rate than other recent Duke post talents, too: Jahlil Okafor (5.3), Marvin Bagley (5.6) and Zion Williamson (5.9).

Mamadi Diakite is in some excellent company when it comes to blocking shots and shooting from the perimeter. Diakite is one of six players in the country — along with Obi Toppin and Kaleb Wesson, fellow NBA prospects — shooting above 40 percent on 3-pointers (minimum 20 3PA), with a block rate of five percent, too.

Devin Vassell continues to solidify his status as one of the top 3-and-D prospects for the 2020 NBA Draft class. Vassell (12.4 points per game) is one of only three players in the country shooting over 40 percent on 3-pointers (13-of-29 3PA), with a steal rate of three percent and a block rate of three percent.

Even before his late-game heroics in the road win over UNC Greensboro, Markell Johnson had things going for NC State. Johnson got downhill against a tough Spartans defense, knifing into the paint (4-of-5 FGA at the rim) and creating efficient offense.

When the hesitation move (one of Johnson’s favorites) is humming and he’s finishing through contract, you know Johnson is feeling good. The win over UNC Greensboro marked the second straight game that Johnson got loose out of NC State’s screen-roll action — both in the Piedmont Triad.

The Wolfpack can function with a more play-making equity on offense this season, thanks to CJ Bryce, Jericole Hellems and Devon Daniels. However, Johnson is still top dog for NC State’s offense: 25.6 percent usage rate, 32.8 percent assist rate, both tops on the roster, by a lot. And when Johnson plays to his full potential, he has the ability to generate a good look every time down the floor.

As of right now, North Carolina ranks outside the top 300 nationally in effective shooting (44.1 eFG%), 3-point percentage (28.7 3P%, down from 36.2 3P% a season ago) and free throw percentage (63.2 FG%). The perimeter shooting of Coby White and Cameron Johnson — the best movement shooter in college hoops last season — is deeply missed.

UNC is also playing at a slightly slower pace, overall (16.1 seconds per offensive possession), and assisting on fewer of its made field goals: 54.3 percent. Finding some sort of scoring production on the offensive glass (37.5 percent rebound rate) is absolutely imperative at the moment.

Last week, from the confines of The Cassell, Virginia Tech feasted on two lesser opponents: wins over Chattanooga and Gardner Webb. Landers Nolley was a major factor in the win over Gardner Webb: 18 points (five 3-pointers), nine rebounds and three assists.

Nolley has an effective shooting rate of 71.7 percent on catch-and-shoot attempts this season, which is sizzling. According to Synergy Sports, that’s fifth best in the ACC among players with at least 50 field goal attempts.

On the first offensive possession of the game against GW, Nolley received a juicy catch-and-shoot look off some roll/replace action from a horns set.

With a high turnover rate (20.4 percent) and bricky perimeter shooting (0.80 points per spot-up possession), Pittsburgh’s offense has, unfortunately, slumped at times this season. However, this is one of my favorite half-court sets in the ACC this season. It’s used by the Panthers to get Xavier Johnson going to the rim.

After bringing the ball up the floor, Johnson drops it off to Trey McGowens and starts to run toward the baseline. Johnson runs off a baseline screen and then sprints into a DHO with Ryan Murphy, followed by a ball screen from Eric Hamilton (61 2P%).

As Hamilton rolls to the rim, Au’Diese Toney lifts up and replaces above the break. This is uptempo, side-to-side action (similar to Purdue’s speed pindowns) that loosens up the middle of the floor and puts Johnson (six assists per 40 minutes) in position to unlock a defense.

Syracuse suffered its worst defensive performance of the season against Georgetown. The Hoyas drained 11 3-pointers and attempted 31 free throws, which helped produce an offensive output of 1.22 points per possession.

Steffon Mitchell continues his work as one of the most diverse talents in the ACC. A rugged rebounder and defender, Mitchell is the only player in the conference with a defensive rebound rate of 18 percent, a block rate of three percent and a steal rate of three percent. He’s one of the primary reasons BCs defense ranks top 20 nationally in both steal rate and opponent turnover rate.

While playing without Olivier Sarr (concussion protocol), Wake Forest still managed to come together for one of the (few) signature victories of the Danny Manning era. Hats off to the Demon Deacons, though. This was a strong offensive outing, led by Brandon Childress (22 points, 10-of-12 FTA) and Chaundee Brown (26 points, 7-of-8 FGA at the rim).

Wake's Chaundee Brown named the ACC player of the week.

Winning at Kentucky is never easy, which is exactly what Georgia Tech found out on Saturday — a 67-53 loss at Rupp Arena. Going up against his former boss, John Calipari, Josh Paster’s club posted a turnover rate above 25 percent and shot under 28 percent on its 3-point attempts (5-of-18 3PA). As a result, the Yellow Jackets scored a measly 0.79 points per possession — for the second straight game.

Tyrese Maxey was everywhere defensively for Kentucky — fighting over screens and making life miserable for Georgia Tech’s Michael Devoe (5 points, 0-of-5 3PA). The same could be said for Ashton Hagans: two steals and a hounding defensive effort.

Georgia Tech is a pretty good team; however, without Jose Alvarado, an offense that was already lacking verve simply doesn’t have enough play-making punch.

Clemson scored a season-low 0.76 points per possession in its loss to South Carolina; the Tigers managed to shoot just 5-of-18 on 2-point attempts (27.8 2P%) while also turning the ball over 22 times — good for a turnover rate of 31 percent. Not great.

We're back in LJC on Friday at 9pm as we host Jacksonville. pic.twitter.com/Fobk0sb4QO