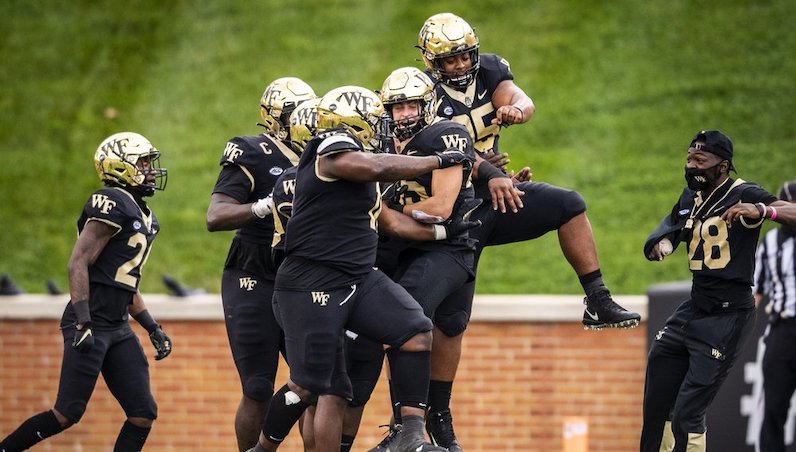 Wake Forest defensive back Nick Andersen (45) is congratulated by teammates after intercepting a pass in the end zone on the last play of the first half of an NCAA college football game against Virginia Tech, Saturday, Oct. 24, 2020, in Winston-Salem, N.C. (Andrew Dye/The Winston-Salem Journal via AP)

Every week during the 2020 football season we highlight five ACC rookies that put together standout performances. This edition is led by Wake Forest defensive back Nick Andersen — the man of the hour in ACC football — and another set of Clemson teammates.

Start writing the Hollywood script now, I suppose. One week after recording nine tackles in a win over Virginia, walk-on freshman safety Nick Andersen had a career day against Virginia Tech. Powered by 11 tackles and three interceptions from Andersen, Wake Forest defeated Virginia Tech in Winston-Salem; Andersen left the field to chants of “Rudy! Rudy! Rudy!” from his teammates.

ACC players of the week for Wake Forest:

Defensive back – Nick Andersen | 11 tackles, 3 interceptions, 1 scholarship to be delivered in January

An unrated 2020 prospect — New Hampshire and Butler were the only two programs to offer scholarships — Andersen became just the second ACC player since the 2000 season to record 10+ tackles and three interceptions in the same game.

Andersen is one of four FBS players with 30+ tackles and at least three interceptions so this season.

It took no time for Myles Murphy shift into a featured role in Clemson’s stacked defense; the freshman end has recorded 3.5 sacks in 176 snaps this season. However, he’s far from alone in this distinction: Bryan Bresee has emerged, too.

Bresee, who has played 190 snaps, leads the Tigers with six quarterback pressures. During Clemson’s win over Syracuse, the former blue-chip prospect forced the first fumble of his career, which came via quarterback Rex Culpepper.

This play came with Clemson up by just six points, late in the third quarter. Clemson defensive back Andrew Booth made a phenomenal play, too, scooping the fumble up and returning it for a touchdown.

Bryan Bresee knocks the ball loose and Booth goes 21 yards for the score.

One of the few bright spots on Syracuse’s offense this season, Sean Tucker put together another good effort at Clemson — before leaving with a lower-body injury.

Back on Saturday, Tucker opened up the second quarter with a seven-yard touchdown run, his third of the season. In total, Tucker ran for 63 yards on 10 carries against the No. 5 defense in the nation, per ESPN’s efficiency metric.

I love Sean Tucker's tweets almost as much as his game.

He will be special and already is.

Tucker already has two 100-yard rushing performances on the season: Georgia Tech (112 yards, two touchdowns) and Liberty (111 yards). The rookie back ranks inside the top 20 of the ACC in both yards per carry (5.1) and yards per game (72.4).

With the offense struggling in Chapel Hill under Hockman, the Pack turned to Finley for the fourth drive. It didn’t take long for Finley to spark a couple strong drives.

In his college debut, Finley completed 13-of-20 pass attempts (65 percent) for 143 yards (7.2 per attempt), one touchdown and two interceptions. One of those two interceptions, however, is a tough one to stick to Finley. Down 14-0, Finley led a drive into UNC territory, before targeting tight end Dylan Parham for a would-be touchdown. Parham was unable to squeeze the pass and Don Chapman tracked back for the interception.

NC State had a touchdown … until it became a North Carolina interception. pic.twitter.com/QnkvEurrU0

Finley shook off the turnover and pushed the Pack down the field for their first touchdown of the game, which ended with a 42-yard touchdown connection with Emeka Emezie.

Demon Deacons land all the way up at No. 5 in this week’s ACC Power Rankings