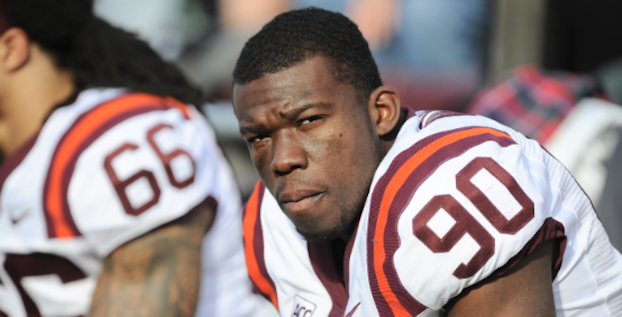 North Carolina topped Virginia Tech with a 30-27 overtime victory on Saturday in what proved to be one of the wildest contests of this ACC football season. While there were several controversial calls throughout the game, arguably the strangest sequence took place just over five minutes into the third quarter.

The Tar Heels were leading 10-3 and driving in Virginia Tech territory when quarterback Marquise Williams threw an incomplete pass on 3rd-and-11. Hokies defensive end Dadi Nicolas was called offsides, however, which would have set UNC up for 3rd-and-6 instead of 4th-and-11.

The defensive end was hit with a 15-yard penalty for unsportsmanlike conduct but shockingly wasn’t ejected.

Rule 9, Section 2, Article 4 of NCAA Football Rules and Interpretations states that players “shall not intentionally contact a game official forcibly during the game.” In addition to 15 yards for unsportsmanlike conduct, the penalty for such action includes “automatic disqualification.”

Nicolas’ contact with Cherry was clearly intentional and warranted an ejection. Of course, it’s not the first time ACC officials have dropped the ball this season.