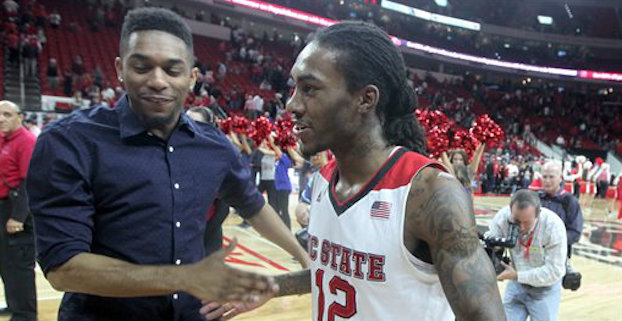 Cat Barber leads the ACC in scoring with 24.1 points per game. (AP Photo)

Voting for individual awards in the ACC is less than three weeks away, meaning the debate over who should be named this year’s league player of the year is starting to heat up.

As the season winds down, multiple players are still in the discussion, and the last 19 days of the league schedule will determine whether or not one of those candidates is able to pull away. For now, though, arguments can be made for and against each player still in the hunt.

Why he deserves your vote: For some, the argument for Johnson starts at “he’s the best player on the best team.” That’s true, but the case for the senior goes beyond that.

Not only is Johnson shooting over 60 percent from the field, but he’s also the only player in the league who’s in the top 11 in scoring and top four in rebounding. He’s played solid defensively, scored 25 or more points on four different occasions and has been consistent throughout the year. His 39-point, 23-rebound showing at Florida State is also as impressive of a signature performance as you’ll find this season.

Why someone else deserves your vote: Johnson may very well be the best player in the league when at his best, and while he’s at the top of his game more often than not, he hasn’t been as consistent as some of the other player-of-the-year candidates in the ACC.

The forward struggled from the field against Clemson and wasn’t much of a factor against NC State. He was even taken out of the starting lineup for a game when Roy Williams wasn’t pleased with the effort level of his frontcourt players. There’s no doubt that calling Johnson the “runaway” POY candidate would be premature at this point.

A case can also be made for what Barber means to NC State. The junior plays a league-high 38.8 minutes per outing and, with the exception of Maverick Rowan’s desperation three-point attempts in the final seconds, is always the player with the ball in his hands when the Wolfpack need a basket. Every opponent keys in on Barber, yet he still shoots a respectable 44.4 percent from the field and 37.2 percent from long range.

Why someone else deserves your vote: Just like a player shouldn’t be rewarded for being “the best guy on the best team,” they also shouldn’t get extra credit for being the only guy the coach can trust with the ball in their hands. Barber has been fantastic, but a player is always going to score more often when his team needs him to take more shots.

Should Barber be ruled out of the conversation simply because he’s on a team that’s 3-9 in conference play? Absolutely not. But should the lack of team success be ignored while stat lines are fully embraced? Nope.

Why he deserves your vote: It’s easy to fall in love with what a player does offensively, but defensive impact often gets lost in the discussion for player of the year. Brogdon has not only been at his best offensively during the most important stretch of the season, but he’s also among the conference’s top defenders.

The senior guard averages 19.1 points per matchup against ACC competition, and he finished with 28 points at Wake Forest in a game that turned UVa’s season around. Brogdon can shoot, put the ball on the floor, find open teammates and play defense, and it’s difficult to find a flaw in his game. Had it not been for Grayson Allen’s buzzer-beater on Saturday, Brogdon would also have a game-winning shot to add to his resume.

Why someone else deserves your vote: Three of Virginia’s four ACC losses were against teams in the bottom half of the conference, and the Cavaliers could have used better performances from Brogdon in each of those matchups. The senior shot below 40 percent against Virginia Tech, Georgia Tech and Florida State, scoring an ACC-low 10 points against the Seminoles.

Brogdon hasn’t produced at the same level as Barber and Allen have offensively. And, unlike Johnson, he’s picked bad times to have his worst games.

Why he deserves your vote: Allen is the only player in the league other than Barber averaging over 20 points per game, and unlike the Wolfpack point guard, he plays on a team that doesn’t need to run its entire offense through him.

The sophomore has easily been the most consistent player on a young Duke squad that’s had its bumps this year, and his game-winning shot against Virginia Saturday could have a major effect on the ACC standings. It can be argued that Allen is the “impact guy on a great team” like Johnson while also producing close to the same level as Barber.

Why someone else deserves your vote: Allen hasn’t quite been the same scorer as Barber, and while Johnson can point to rebounding and Brogdon to defense, it’s tough to find that second part of the sophomore’s game that makes him stand out when compared to the others.

In terms of averages, Allen also has more time to boost his numbers. He plays two more minutes per game than Brogdon and over nine more than Johnson.