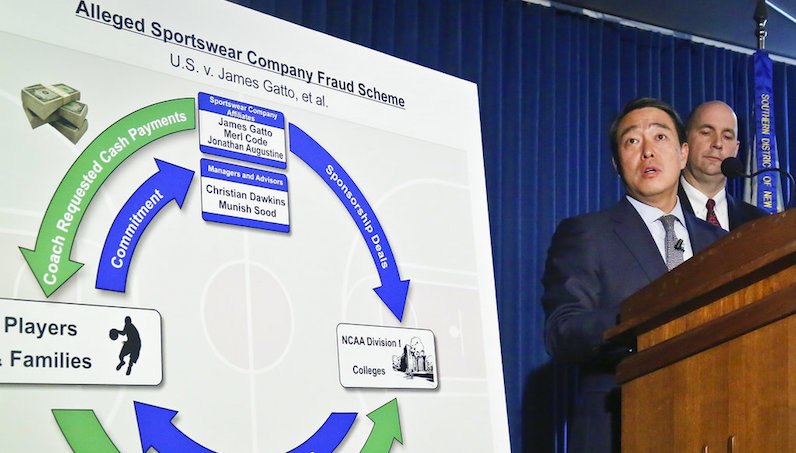 Several ACC basketball programs were named in evidence presented during discovery of the FBI’s investigation into corruption in college basketball. The findings are detailed in a report published on Yahoo Sports. Duke, North Carolina and NC State are all named — including current and recent starts: Dennis Smith Jr. and Wendell Carter.

The documents obtained are a part of the federal investigation into the sport, which has criminal cases pending; however, some of the finding, specific to the ACC, could lead to potential NCAA penalties.

According to Yahoo Sports reporters Pat Forde and Pete Thamel: “The documents tie some of the biggest names and programs in the sport to activity that appears to violate the NCAA’s amateurism rules.”

For Wendell Carter: Yahoo details him as one of the current stars tied to “specific potential extra benefits for either the athletes or their family members. The amounts tied to players in the case range from basic meals to tens of thousands of dollars.”

At the heart of discovery is former prominent NBA agent Andy Miller, Christian Dawkins (a former associate) and his sports agency, ASM Sports. This is where Dennis Smith Jr. is tied in.

According to Yahoo, Smith is listed in a balanced sheet for ASM and “Received $43,500 according to the documents. Another document headed ‘Pina,’ for ASM agent Stephen Pina, says Smith received a total of $73,500 in loans, and includes notes about ‘options to recoup the money’ when Smith did not sign with ASM.”

Officials from NC State were reached for comment, but either declined or didn’t respond. With the criminal investigation underway, at the moment, it’s unclear how the NCAA can or will be involved.