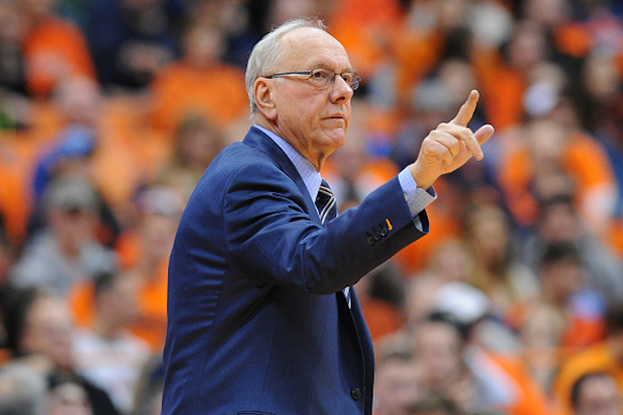 Even Mike Krzyzewski’s records are made to be broken. The Duke coach will be the first men’s college basketball coach to reach the 1,000-win mark, but he won’t be the last.

One Division I coach is right on his heels. Syracuse’s Jim Boeheim, the only other major college basketball coach well over the 900-win mark, could join him next season.

Assessing the next crop of potential 1,000-win coaches is no easy task and in many ways puts Krzyzewski’s (and eventually Boeheim’s) feat into further perspective.

Simply put, any coach looking to hit 1,000 should probably get his first head coaching job around age 30 and plan to coach until he’s around 70, probably both, and most important, be at the top of his game for most of four decades.

Notes: Boeheim, who already has the record for wins at a single program, would be the odds-on favorite to match Krzyzewski’s 1,000 wins. He sits at 14-5 right now, meaning he could hit 1,000 wins late next season.

Notes: Huggins’ pace has had a few hiccups. First, he missed one season in between his departure at Cincinnati and his arrival at Kansas State in 2006. More recent, Huggins also slipped below 20 wins for three consecutive seasons before this year. That said, he could still get to 1,000 by his early 70s.

Notes: Pitino may need to coach until he’s 80 to reach the 1,000-win plateau. Of course, he could have reached it sooner if not for six non-consecutive seasons in the NBA. Michigan’s John Beilein (626 wins at age 61) never left the college game, but he is on a similar pace.

Notes: Donovan started his career with the nickname of “Billy the Kid,” taking the Marshall job at age 28, the same age Krzyzewski was when he started at Army. Donovan will hit 500 wins before he turns 50, something even Krzyzewski can’t say.

Notes: Another coach with a ton of wins at a relatively young age at a place where he’s going to build his win total. Kansas has won fewer than 30 games just once since 2009, so Self is ahead of that 22-season pace to 1,000.

Notes: The low-key Matta may be a dark horse in this race, but that 27-wins-per-season average can’t be ignored. He’s also remarkably consistent. He’s never won fewer than 20 games in a season and has won more than 30 games three times.

Notes: At first, Few seemed like the perfect coach who could challenge for 1,000 wins — young(ish), wildly successful already and at a place where he could reel off seasons with 27 wins or more until the end of his career. But Few also was in his late 30s when he took over at Gonzaga, meaning age will catch up to him before 1,000 wins.

Notes: We include Stevens as a hypothetical. Taking over at Butler at age 30 and racing to two 30-win seasons and two Final Fours in his first four seasons put him on a torrid pace. Should he ever return to the college game, he’ll probably take over a plum job, helping him pick up where he left off. But the if and when of such a scenario is uncertain.

Notes: A lot can happen in 30 years, but Smart is one of the only realistic coaches who could approach 1,000 wins on Kzyzewski’s timetable of 67 years old. See you in 2046?

Notes: This one is a little surprising. Miller is young and successful. He’s at a power program and even better days seem to be in his future with the foundation he’s built at Arizona. He’ll probably better his career average over the next few seasons — he won 17 games in his first year at Xavier and 16 in his first year at Arizona — but he also started his first coaching gig at 36.

Notes: Here’s a reminder that non-Division I wins will count in at least a section of the NCAA record book. Byrd reached the 700-win club this season at Belmont, a program that was in the NAIA when he started. The transition means Byrd went seven consecutive seasons without posting 20 wins. Belmont has averaged 24 wins since 2005-06, meaning Byrd could get to 1,000 wins two seasons earlier.