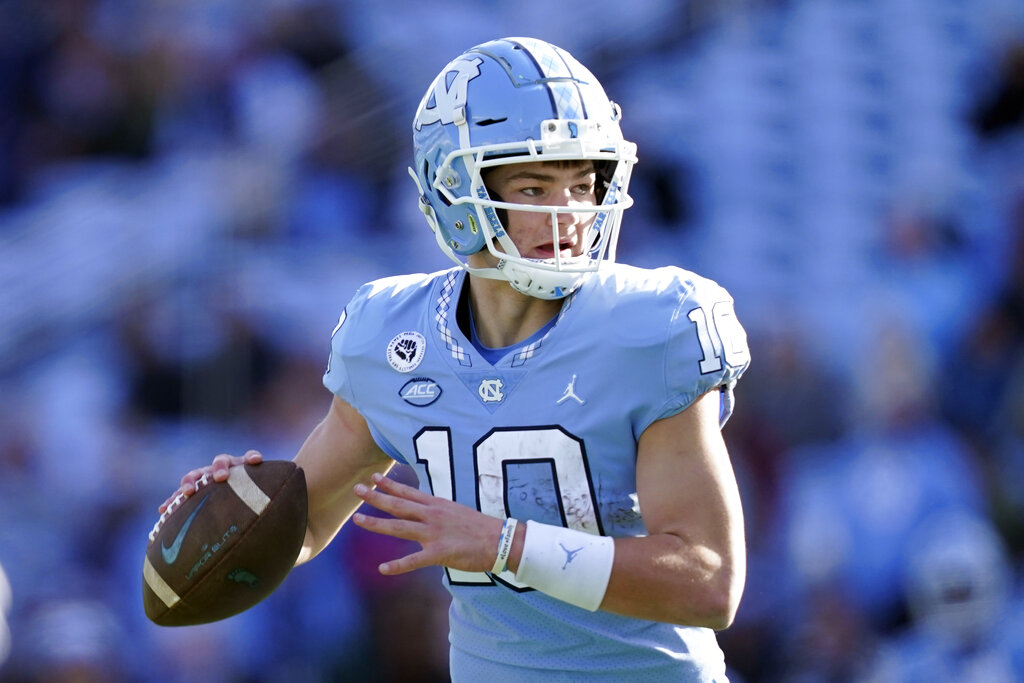 FILE - North Carolina quarterback Drake Maye looks to pass against Wofford during the second half of an NCAA college football game in Chapel Hill, N.C., Nov. 20, 2021. Maye had a strong spring as the Tar Heels seek to replace four-year starter Sam Howell. He completed nine of 12 passes for 113 yards and two touchdown in the spring game. (AP Photo/Gerry Broome, File)

North Carolina redshirt freshman quarterback Drake Maye, who leads the nation in total offense and keyed the Tar Heels to the Coastal Division title, has been voted the 2022 Atlantic Coast Conference Football Player of the Year.

Pitt junior defensive tackle Calijah Kancey was selected as the ACC Defensive Player of the Year in voting by a 65-member voting panel consisting of 51 selected media and the conference’s 14 head coaches.

Maye, who hails from Huntersville, North Carolina, has thrown for 3,847 yards and 35 touchdowns to go along with 629 yards rushing and six more TDs. He is just the ninth FBS quarterback since 2010 to post 3,500 passing yards, 35 passing TDs, 500 rushing yards, and five rushing TDs in a season.

Also voted the ACC Offensive Player of the Year for the 2022 season, Maye became the only conference player in the last 25 years to register at least 300 passing yards and 50 rushing yards in four consecutive games. He was voted the ACC Quarterback of the Week six times during the regular season and was a five-time ACC Rookie of the Week.

Maye was named a semifinalist for Walter Camp National Player of the Year, as well as the Davey O’Brien, Maxwell and Alexander Awards. He was also named to the Watch List for the Manning Award, which recognizes college football’s top quarterback.

The 6-foot, 280-pound Miami native has been one of college football’s most dominant players regardless of position this season, compiling 31 tackles, 14.5 tackles for loss and 7.5 sacks in 11 games played.

The complete breakdown of the 2022 ACC Football Player of the Year voting: