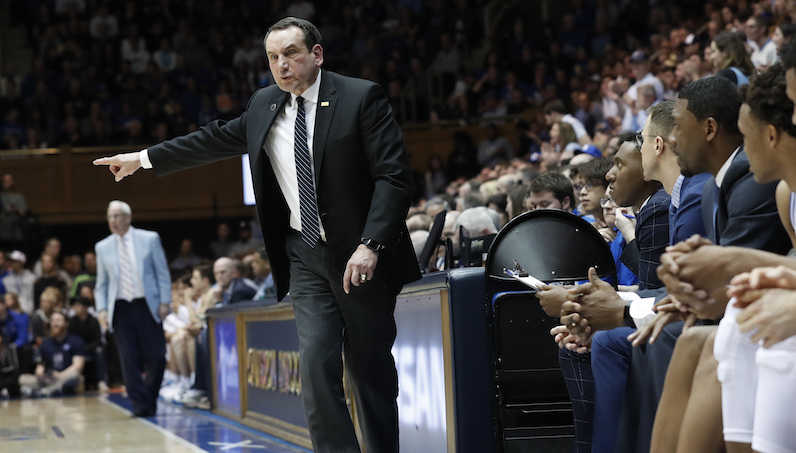 Duke head coach Mike Krzyzewski reacts to an official during the second half of an NCAA college basketball game against North Carolina in Durham, N.C., Saturday, March 7, 2020. (AP Photo/Gerry Broome)

Greensboro — According to a report from the News & Observer, Duke played a significant role in the ACC’s decision to cancel the ACC Tournament. As ACC Commissioner John Swofford mulled over the status of this year’s tournament, Duke University president Vincent Price decided that the Blue Devils wouldn’t participate. Duke’s decision was made independently.

Just before noon, while Florida State’s players warmed up on the court, Price notified his fellow ACC presidents and [John] Swofford that Duke would suspend all athletic competition, including Thursday’s quarterfinal against N.C. State.

Duke was initially scheduled to take on NC State in the second of four games on Thursday, March 12. Even before that, play was supposed open on Thursday with a 12:30 p.m. tip-off between Florida State and Clemson. That game was official called off at 12:14 p.m.

New from me and @stevewisemanNC. Duke president Vincent Price forced ACC's hand by shutting down all athletic competition: “Even after the moves were made to protect the public, I remained concerned about the safety and welfare of our athletes.” https://t.co/WvDmuiBO01

Duke coach Mike Krzyzewski released a statement, too, which was in full support of the university’s decision.

We emphatically support the decision made by Dr. Price today regarding the suspension of athletic competition at Duke. The welfare of our student-athletes, and all students at Duke, is paramount, and this decision reflects that institutional priority. Certainly, I want to applaud Dr. Price, who took a leadership role with his presidential peers and the Atlantic Coast Conference in arriving at this decision.

Less than an hour before the ACC called off the annual event, the SEC, Big Ten and AAC cancelled their tournaments, too. Florida State, regular season champions of the ACC, was named the league’s official champion of the 2019-20 season.

Beyond the various conference tournaments, there’s still much confusion with how to proceed with the NCAA Tournament. Currently, the NCAA is set to host the event — without fans.

Jeff Goodman is now reporting, though, that there could be changes on the horizon with that event, too.

Nearly 10 of the top coaches in college basketball have spoken and are on board with the following idea, source told me.

– Selection Sunday on as planned.

– Postpone the NCAA Tournament and continue to monitor the situation.

“We all talked, and agree on this,” once told me.