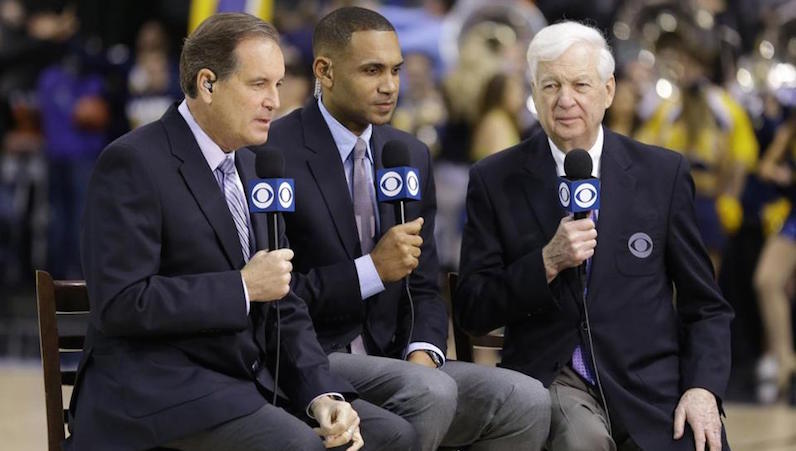 Jim Nantz, Grant Hill and Bill Raftery were the lead broadcast team for CBS at the 2017 NCAA Tournament. (AP Photo)

Did you come down with a case of March Madness in recent weeks? Do not worry; you are not alone. The NCAA Tournament is one of those sporting events that captures a large share of the American public. Casual fan or not, people tune in to this event. It is like a diet version of the Super Bowl, and in 2017, NCAA Tournament TV ratings went through the roof.

Tournament coverage across all four TV channels — CBS, TBS, TNT and truTV — went up significantly. According to the NCAA, the tournament snagged a 7.2/15 average rating/share. That is a 13 percent increase over the 2016 tournament.

Monday night’s championship bout between North Carolina and Gonzaga showed a 21 percent increase over last season — with a 14.5/24 Rating/Share. This was the third-highest rated championship game since the 2005 tournament. According to Nielsen, 23 million people watched the title game on CBS. However, back in 2015, when Duke defeated Wisconsin, over 28 million people tuned in.

The Tar Heels, a major national brand, drew big numbers even before the championship game. UNC’s victory over Kentucky in the Elite Eight captured a total audience of nearly 16 million people. That is what happens when two strong programs with broad followings play early on a Sunday evening. That is a time-friendly slot.

But of course, we cannot have this conversation without looking at streaming viewership. The audience through this platform will only grow.

This is why it should come as little surprise that 4.4 million people live-streamed the national championship game. That is a monster increase of 29 percent over 2016 and is the largest streaming audience in tournament history. In total, there were 98 million live streams of the tournament, which is a 33 percent increase from a year ago.

All hail the cord-cutters.

All hail the ACC, too

Not only did the ACC claim its second national championship in three seasons; the league’s footprint also included several of the top viewing markets. Per the NCAA, four of the top five metered markets contain cities/areas located under the ACC’s umbrella.

This is pretty impressive for a football conference, right?