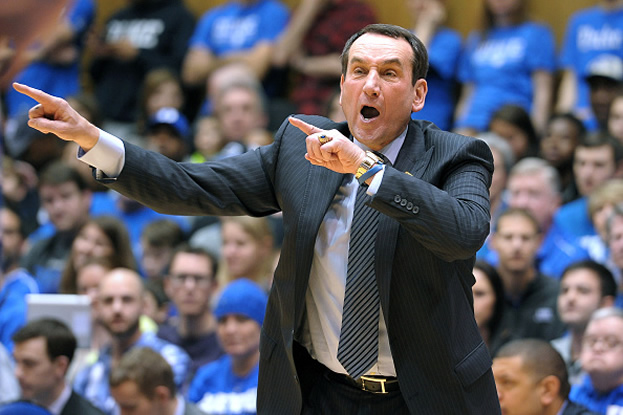 The headline of the week in college hoops will be Duke coach Mike Krzyzewski’s bid for 1,000 career wins. He’ll try to hit that landmark on the road, making Duke’s game at St. John’s a part of the theme of the weekend.

A number of top teams are looking for key wins on the road, many of which to re-establish their bona fides as conference contenders or national contenders.

Kentucky’s undefeated record wouldn’t seem to be in danger against a cold South Carolina team, but this game may be personal after the Wildcats were embarrassed in Columbia a year ago. Kansas and Oklahoma, on paper, are Big 12 contenders, but they’ve taken losses in the last week and will look to pick up key wins in the state of Texas.

Meanwhile, teams like Indiana and LSU are facing key show-me moments on the road after building momentum through the week.

South Carolina handed Kentucky its low point of last season with an improbable 72-67 win over the Wildcats in Columbia on March 1. Kentucky says that was the start of the turnaround, and indeed, UK has lost only three times since, twice to Florida and once to UConn in the national title game. A repeat of last season seems to be a long shot. South Carolina is improved, but the Gamecocks have dropped four of their first five SEC games. Shooting 29.3 percent from 3 in SEC play also isn’t a great trend for South Carolina against this Kentucky team.

After back-to-back losses to Oklahoma and Oklahoma State, Texas seems to have pulled itself back together, particularly on the defensive end of the floor. The Longhorns allowed West Virginia and TCU to average just 0.73 points per possession. Now, Kansas is the team in need of a statement. The Jayhawks have lost two of their last three road games (Iowa State and Temple) and let a 20-point first-half lead against Oklahoma evaporate early in the second half before pulling out the win. Is this  Texas’ time to assert itself against the Jayhawks like Iowa State did last week? Or are freshman Kelly Oubre and Cliff Alexander starting to emerge as star-caliber players?

Oklahoma is one of the toughest teams in the country to figure out. The Sooners have a veteran team that appeared to be a good candidate to contend for the Big 12 or make a deep run in the NCAA Tournament. Yet the Sooners are on a 1-3 skid in the league and lost in the non-conference schedule to Creighton and Washington. Those kind of results are almost Baylor-like.

This is the kind of game LSU will need to win if the Tigers are a legitimate NCAA Tournament squad. Vanderbilt is 1-4 in the SEC, but the Commodores just gave Kentucky fits on the road. Winning in Memorial Gym isn’t always easy, and LSU hasn’t proven it can put together consistent results during the last few seasons. Back-to-back road wins over Florida and Vanderbilt would help ease those concerns. This will also be a key matchup of big men between LSU’s Jarell Martin and Jordan Mickey and Vanderbilt’s Damian Jones.

After being dealt the blow of losing Caris LeVert for the remainder of the season, Michigan has to be pleased with the way it bounced back against Rutgers. The Wolverines defeated the Scarlet Knights 54-50 in a comeback win on the road without their best player. Of course, Wisconsin at home is a different beast. Wisconsin is dealing with an injury of its own with point guard Traevon Jackson out with a broken foot. The absence has been no problem so far as the Badgers had six turnovers against Nebraska and only one against Iowa.

Surprise, surprise: Indiana is tied for the Big Ten lead. The season started with Tom Crean’s job in question after a rash of off-court issues and then a home loss to Eastern Washington. The Hoosiers have won four in the row in the Big Ten, and they’re doing it with the most explosive team in the league. In the last four games, Indiana is averaging 1.18 points per possession in the process. A 69-66 win at home over Ohio State started this streak; Another win would further solidify IU as a Big Ten contender.

With the next three games on the road, Mike Krzyzewski likely won’t be able to win No. 1,000 at Cameron Indoor Stadium. Madison Square Garden, though, feels like the next best place. Duke is back on track with a pair of lopsided wins over Louisville and Pittsburgh erasing memories of back-to-back losses more than a week ago. St. John’s has cooled since a nice start to the season, but a Red Storm team with guard Rysheed Jordan flourishing will give Duke something to think about.

What happened to Seton Hall? The Pirates entered the top 25 after a win over Villanova and a 12-2 start and then promptly went on to lose three of four, including back-to-back games at home. Maybe a trip to Butler will help Seton hall refocus, but the Pirates already lost 79-75 in overtime at home to the Bulldogs on Jan. 13. The difference in this game may be from the 3-point line. Butler is shooting 33.3 percent from 3 in conference games while Seton Hall is holding league opponents to 24.1 percent, the best figure in the Big East.

Should this game even have a 3-point line? Duke underscored Louisville’s season-long struggles from long range about a week ago, but Pittsburgh isn’t much better. The Cardinals are shooting 30 percent from 3 in ACC play while Pitt is shooting 26.9 percent. The Panthers, though, seem to acknowledge this weakness by taking only 24 percent of their shots from 3.

Here is NC State’s season since Dec. 12: W-L-W-L-W-L-W-L-W-L-W-L. The trend says NC State is in for a victory over a solid Notre Dame team. The Irish, though, have one of the best offensive teams in the country, ranking No. 1 in adjusted offensive efficiency on KenPom.com. This is a flexible group that went small to beat Miami in the second half last week and then had 6-10 center Zach Auguste go for 16 points against Virginia Tech on Thursday.