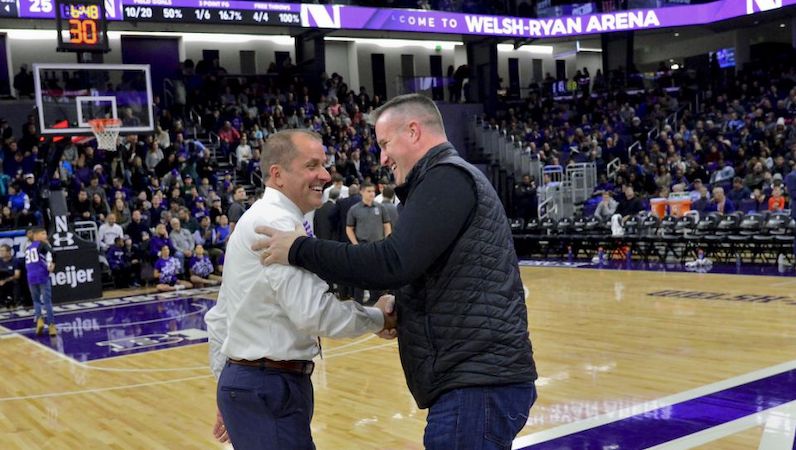 Northwestern Wildcats Athletic Director Jim Phillips, left, congratulates head football coach Pat Fitzgerald as he was being honored for being named Big Ten Coach of the year, during the first half of an NCAA college basketball game against Oklahoma on Friday, Dec. 21, 2018, in Evanston, Ill. (AP Photo/Matt Marton)

Back in December of last year, the ACC named then-Northwestern AD Jim Phillips as the conference’s new commissioner. After 20+ years running the ACC, John Swofford planned to retire; Phillips would be his successor.

This is obviously an interesting time to work in major college athletics; the landscape is working to (hopefully) transition to beyond the COVID-19 pandemic, while also looking ahead to upcoming changes with name, image and likeness (NIL).

Phillips joined Josh Graham on The Drive (WSJS) discuss expansion in college athletics (“You have to be ready.”), TV deals and the ACC’s partnership with ESPN, the possibility of Notre Dame becoming a full-time league member, NIL and plans for full capacity at football stadiums in 2021.