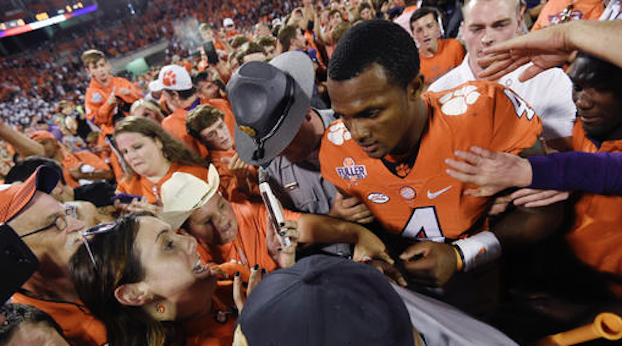 The ACC as a league is making noise through five weeks of the regular season with six teams currently ranked in the AP Top 25 poll. Along the way, some of the conference’s top players have gained national recognition.

Three ACC quarterbacks made the cut for the latest edition of ESPN’s Heisman Watch: Lamar Jackson of Louisville, Deshaun Watson of Clemson and Mitch Trubisky of North Carolina.

Despite the Cardinals’ 42-36 loss in Death Valley over the weekend, Jackson maintained his spot atop the list. The sophomore has completed 59.4 percent of his passes for 1,625 yards and 14 touchdowns (with four interceptions) through five outings. In addition, Jackson has rushed for 688 yards and another 14 scores.

Watson’s Saturday performance helped him climb to the No. 2 spot on ESPN’s list. His stats over Clemson’s first five games include a 60.8 percent completion rate, 1,302 passing yards and 14 touchdowns through the air (with seven picks). On the ground, Watson has churned out 211 yards.

Trubisky made his first appearance on ESPN’s Heisman Watch by claiming the No. 11 spot. The Tar Heel junior leads the nation in completion percentage (76%), passing for 1,711 yards and 13 scores with zero interceptions. His four rushing touchdowns are good for fourth in the ACC for quarterbacks.