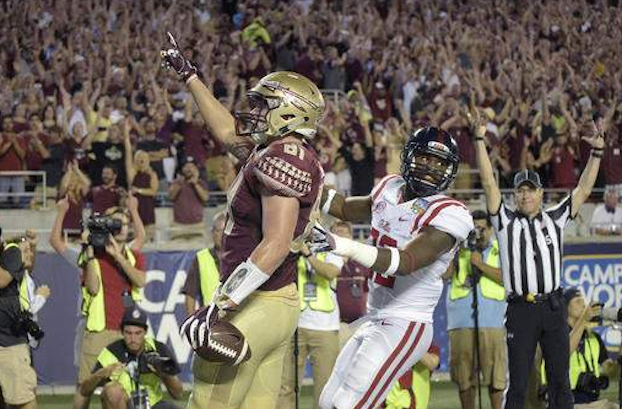 Tight end Ryan Izzo was critical in the second half against Ole Miss. (AP Photo).

Well, that was quite the opening weekend for college football. It was a strong return for the ACC; the league dropped just two out-of-conference games: North Carolina against Georgia, and Virginia’s stunning loss at home to Richmond. Florida State, of course, stole the show with their sensational win Monday night against Ole Miss.

A plethora of ACC receivers emerged during week one, too — some you’d expect, others maybe not so much. Here’s a statistical dive into a five developments that occurred during the opening week of play.

No ACC team did what FSU accomplished through the air in their 45-34 comeback victory over No. 11 Ole Miss in Orlando: four receivers — Jesus Wilson, Travis Rudolph, Dalvin Cook and Kermit Whitfield — caught at least five passes. Their 27 receptions were good for a game-changing 353 yards.

Florida State changed the entire complexion of that game against Ole Miss in the third quarter, when they outscored Mississippi 23-0. Five Seminoles caught a pass that quarter — Wilson, Cook, Whitfield, Ryan Izzo and Da’Vante Phillips. These five receivers combined for nine catches, 118 yards and a touchdown (a two-yard reception by Izzo that helped extend FSU’s lead). Whitfield, the team’s resident speedster, also ran a touchdown in from three yards out in that quarter, which gave Florida State their first lead of the game.

According to SB Nation’s Bill Connelly, here’s how FSU targeted their primary receivers:

To read up more on FSU’s wide receivers and the return of Mike Williams, sign up for basic access to ACCSports.com.