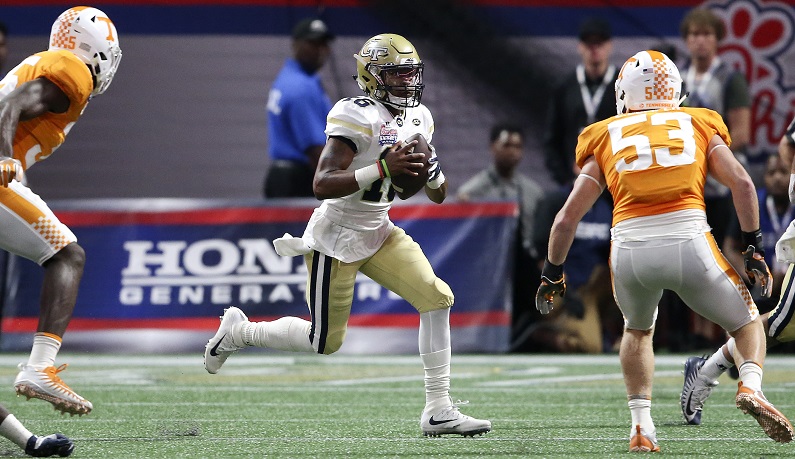 Georgia Tech quarterback TaQuon Marshall (16) runs the ball against the Tennessee in the first half of an NCAA college football game, Monday, Sept. 4, 2017, in Atlanta. (AP Photo/John Bazemore)

The Atlantic Coast Conference Football Players of the Week have been recognized following their performances in Week 1 of the 2017 season.

OFFENSIVE BACK – TaQuon Marshall, Georgia Tech, Jr., QB, 5-10, 180, Hamilton, Ga.
Making his first-career start, Marshall set three Georgia Tech records and one ACC record in the Yellow Jackets’ 42-41 double-overtime loss to No. 24 Tennessee. Marshall ran 44 times for 249 yards and five touchdowns in his debut as a starter. His 249 rushing yards set Georgia Tech and ACC records for rushing yards by a quarterback and rank third in Georgia Tech history, regardless of position. His five touchdown runs and 44 carries set Georgia Tech records. Marshall also threw for 120 yards on 5-of-10 passing, and his 369 yards of total offense rank 11th in school history.

RECEIVER – Cam Phillips, Virginia Tech, Sr., WR, 6-0, 205, Laurel, Md.
Phillips tallied 138 receiving yards on seven catches with a 32-yard touchdown reception in the No. 21 Hokies’ 31-24 victory over No. 22 West Virginia. The touchdown catch was the 11th of his career, which is tied for 11th in program history, and put Tech ahead 24-17 with 2:02 in the third quarter. Phillips had a 28-yard reception that placed the ball at the West Virginia 1-yard line and set up Virginia Tech’s first score of the game. Phillips moved into fifth place in the Virginia Tech record book with 2,201 career receiving yards and into sole possession of third place on Tech’s career receptions chart with 172.

LINEBACKER – Andrew Motuapuaka, Virginia Tech, LB, 6-0, 240, Sr.-r, Virginia Beach, Va.
Motuapuaka led the Hokies with 12 tackles while posting a sack and two quarterback hurries in the No. 21 Hokies’ 31-24 victory over No. 22 West Virginia. With the Mountaineers driving in the fourth quarter, Motuapuaka sacked quarterback Will Grier for a loss of two yards with 22 seconds left, forcing West Virginia to use its final timeout. Seven of Motuapuaka’s 12 tackles came in the second half. It marked the 11th double digit tackle performance of Motuapuaka’s career.

DEFENSIVE BACK – Derwin James, Florida State, S, 6-3, 211, So.-r, Haines City, Fla.
After missing the final 11 games of 2016 with a knee injury, James return to record six tackles against No. 1 Alabama on Saturday night. He teamed with Fred Jones on a quarterback sack and helped FSU became the first team since 2008 to hold Alabama to fewer than 100 passing yards and 200 rushing yards in the same game. The defense also held the Crimson Tide to 3-for-16 on third down conversions and in the third and fourth quarters, allowed just 13 points over five consecutive possessions that began in FSU territory.

SPECIALIST – Colton Lichtenberg, Boston College, PK, 5-10, 190, Jr., Savannah, Ga.
Lichtenberg recorded a career-high nine points on a career-high three field goals in the Eagles’ 23-20 win at Northern Illinois. The Georgia native was a perfect 3-for-3 on field goal tries, including the game-winner from 37 yards out with 2:13 to play. His 42-yard fieldgoal to tie the game in the first quarter was the second-longest of his career. Lichtenberg also connected from from 35 yards out in the second quarter.

ROOKIE – Josh Jackson, Virginia Tech, QB, 6-1, 2-7, Fr.-r, Ann Arbor, Mich.
Jackson helped Virginia Tech retain the Black Diamond Trophy while accounting for 336 yards of total offense and two total TDs in the No. 21 Hokies’ 31-24 victory over No. 22 West Virginia. Jackson, who threw for 235 yards and ran for 101, became the first Hokie quarterback to pass for more than 200 yards and rush for more than 100 yards since Logan Thomas had 224 passing yards and 101 rushing yards versus Duke in 2013. Jackson had a five-yard touchdown run and registered a long rush of 46 yards that set up the go-ahead score with 6:30 left in the game. Jackson’s rushing total was the most for a Virginia Tech quarterback in his first career appearance since 1987.