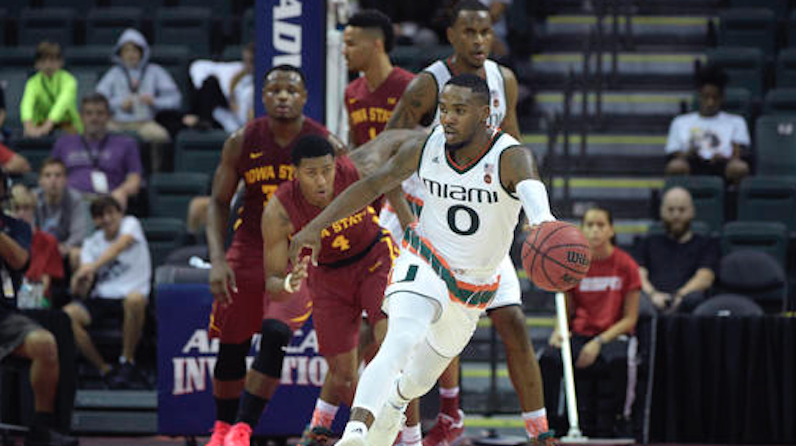 Ja'Quan Newton will try to push Miami to another upset over Duke on Saturday. (AP Photo)

Let’s get this out of the way first: It would be a stunner if Miami went up to Cameron Indoor Stadium on Saturday and pulled off an upset.

The Hurricanes just allowed Wake Forest to run roughshod in a 96-79 loss on Thursday. It’s just the second time Miami has allowed that many points since Jim Larranaga took over in 2011. And it was to Wake Forest, which is 11-7 (2-4 ACC) and led by as many as 23.

After that kind of performance on the road, it’s tough to bet on the youthful Hurricanes to bounce back and beat No. 18 Duke in Durham.

But as Larranaga has showed, it’s not impossible.

But this is a different team than last year’s squad, which reached the Sweet 16, and the 2013 team that blew out then-No. 1 Duke to signal that Miami had arrived under “Coach L.” The commonality to those teams: They were old and had excellent guard play.

Last year’s Hurricanes had a veteran point guard, scorer and center. The 2013 squad, which won the ACC and set a program record for wins, was as old as they come and had a first-round pick running the point in sophomore Shane Larkin.

Larranaga has outdueled Mike Krzyzewski because his teams have been veterans. They’ve run Larranaga’s ball-screen offenses perfectly, like in the Jan. 2015 game where Angel Rodriguez and Manu Lecomte combined for 47 points and shocked then-No. 4 Duke, snapping its 41-game home winning streak.

Guard play is so critical in college basketball. Teams that rarely turn the ball over are rarely out of games. Backcourts that can break down a defense and create open looks for others are a primary asset. Miami had both elements in recent wins over the Blue Devils, who can out-talent people with their wealth of McDonald’s All-Americans.

Miami has some talent this year — two 5-star freshmen in Bruce Brown and Dewan Huell, a former top-50 recruit in junior Ja’Quan Newton — but is young, turnover-prone and has a first-time, full-time point guard in Newton.

Not only that, but Miami lacks any frontcourt presence, meaning the guards must create the offense — which puts pressure on an already-strained backcourt. Oh, and UM, after dismissing guard Rashad Muhammad in November, has just nine scholarship players.

A lot will have to go right for the Hurricanes to pull off another upset of Duke. While Larranaga has figured out tougher situations in his career, he may not have the right pieces to do it Saturday.