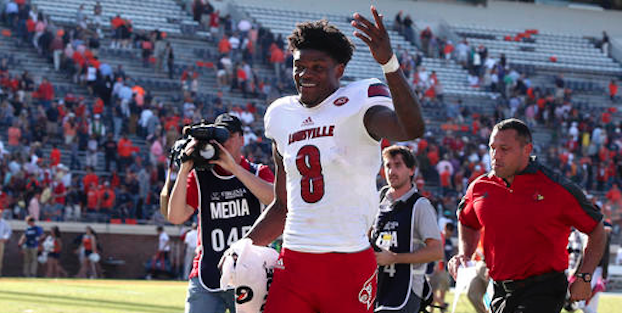 Lamar Jackson was named ACC Player of the Year on Wednesday. (AP Photo)

Florida State’s DeMarcus Walker was recognized as the league’s Defensive Player of the Year.

Jackson – also voted the ACC’s Offensive Player of the Year – concluded the regular season holding the Louisville school record with 4,928 yards of total offense and is responsible for an ACC single-season record 51 total touchdowns (30 passing, 21 rushing). A finalist for the Manning, Maxwell and O’Brien awards and a leading contender for the Heisman Trophy, Jackson has set the ACC record for rushing yards by a quarterback in one season with 1,538, and his 21 rushing touchdowns are also the most in a single season by an ACC signal-caller.

The Pompano Beach, Florida, native shattered Louisville’s single-season record for rushing yards in a season, and his eight 100-yard rushing games also broke a school record. As a passer, Jackson has thrown for 3,390 yards and 30 touchdowns, including 417 yards in a win on the road at Marshall on September 24.  He amassed an amazing ACC-record 610 total yards in a win over Syracuse, a game in which he came within one rushing yard of becoming the first player in FBS history to pass for 400 yards and rush for 200 yards in the same game.

Jackson, who led the Cardinals to nine wins a share of the ACC Atlantic Division championship,  was named the Walter Camp Offensive Player of the Week on three occasions and was honored three times as the Atlantic Coast Conference Offensive Back of the Week.

The ACC Offensive Player of the Year balloting was similar, as Jackson led with 36 votes, followed by Watson with six and Cook and Conner with three each.

Florida State’s Walker wrapped up the regular season tied with Boston College’s Harold Landry for the FBS lead in quarterback sacks with 15. The Jacksonville, Florida, senior has a total of 17.5 tackles for loss on the season and leads the Seminoles with 64 total tackles.

A 2016 first-team All-ACC selection at defensive end and a two-time ACC Defensive Lineman of the Week, Walker has forced three fumbles on the season while recovering two (both in last Saturday’s win over Florida) and breaking up a pair of passes. Perhaps his biggest play during the 2016 season was his blocked extra point in the final minutes at No. 10 Miami, which preserved a 20-19 Florida State win.

ACC Offensive Player of the Year