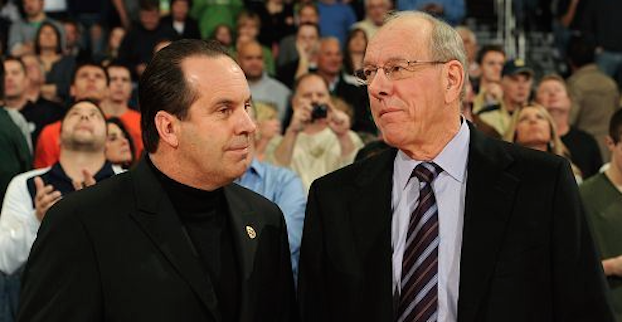 Mike Brey (left) and Jim Boeheim (right) are each in their third year as head coaches in the ACC. (AP Photo)

Fox Sports Net play-by-play man Wes Durham stopped by The David Glenn Show on Thursday to talk ACC hoops, potential NCAA tournament bubble teams and the possibility of the ACC getting its own network down the road. With 13 teams already losing at least two games in conference play, Durham discussed the parity within the league.

Durham pointed out what newer members Louisville, Notre Dame, Pittsburgh and Syracuse have added to the conference.

“Mike Brey said yesterday afternoon to me, ‘You know what this is? This is the old Big East,'” Durham stated. “This is the eight-, nine-, 10-team Big East that they had when Notre Dame was in there a few years ago.”