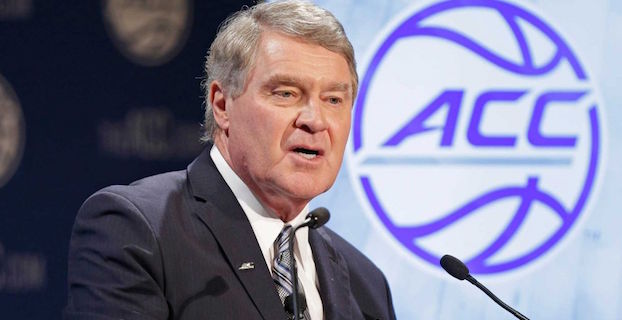 At Operation Basketball, commissioner John Swofford brought up an unsolicited idea on how to improve college basketball–the sport needs an opening day.

“I think it has to be more along the lines of could we start a specific date, such as Thanksgiving weekend, and that’s the start of college basketball, and everybody plays,” he said. “You know, I would tend to look at … making a big deal out of one weekend that in essence is a celebration of the start of the college basketball season. You know, right now it kind of just sort of slowly rolls out of the bucket, so to speak, I guess.”

Since then, the idea that college basketball needs an opening day has become an Issue. Columnists have shared their opinions. Reporters quizzed coaches on how the sport could benefit from that. National media has suggested possible dates for the big event.

Imagine what we could have if Swofford’s idea is ever implemented! Imagine a day when nine of the top 10 teams in the nation all play their openers, and 23 of the top 25 are in action.

A dozen ACC teams could play their openers, many of them at home, but a few at neutral sites, maybe even an international game. There would be plenty of cupcakes, but maybe a couple of solid opponents–Gonzaga, maybe. Possibly a Temple.

After that explosive start to the season, we could continue the rollout of the season over the next couple of days, making a basketball-packed weekend. By the end of the weekend, every team in the conference would have played, with a few, maybe even as many as five, playing two games.

I know just what we could call this college basketball holiday, too: Next Friday.

Virginia Tech and BC play on Saturday, and Duke gets in its second game. Florida State opens on Sunday, the same day that State, Wake, Carolina and Clemson get in their second games.

Maybe you’re more interested in national games? You want to see what Kentucky has this season, or Michigan. Plus, you’ve heard good things about Maryland. They all tip off at 7:00 on Friday. Whichever of the three you pick, it will be your second game of the evening, because No. 7 Iowa State plays Colorado at 5:00.

Ten games will be played at neutral sites, topped by Pitt-Gonzaga and Washington-Texas.

Then, on Saturday, 47 games are on the schedule, topped by Kentucky, Duke and Butler. Eleven of them will be televised. There are 44 more on Sunday, with nearly half–20–being televised. Carolina, Wisconsin and Purdue top the list of Sunday games.

The grand total: 244 Division 1 basketball games over a two and a half day period. 95 will be televised. 29 involve ranked teams.

Assuming a game takes two and a half hours (and not the two hour time slot that ESPN gives them), you can watch basketball, uninterrupted from 5 PM on Friday until 3 AM Saturday. Then, nine hours later, you can get started again and watch from noon to 1:30 AM. On Sunday, the schedule goes from noon to 12:30 AM. That’s 36 hours of basketball over a 55 and a half hour span.

Every team you like will play. Many twice. Most on television … as college basketball slowly rolls out of the bucket.

Sorry for the facts. I just wanted to celebrate the start of the college basketball season a little. Now everyone can go back to trying to solve the opening day problem.