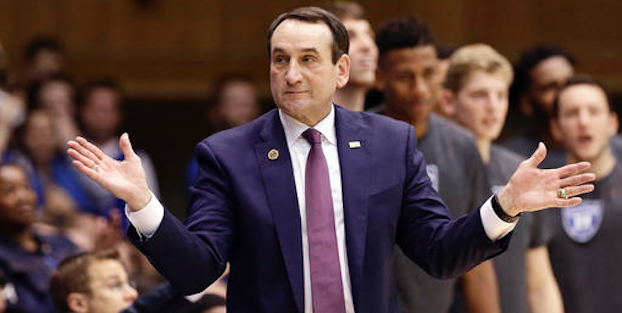 Mike Krzyzewski and his staff are in the process of assembling another star-studded recruiting class. (AP Photo)

There will be changes following the longer spring national signing period, although a majority (but not all!) of the very best class of 2017 prospects have already signed national letters of intent.

Duke, North Carolina, Miami and Pitt have so far secured the best classes in the conference, but several more ACC members have also recruited effectively and impressively. Included in that category are Louisville, Florida State, Virginia Tech and Clemson. To a lesser extent Wake forest, Notre Dame and Syracuse, in particular, have fulfilled vital needs.

At the least, low-post beast Carter (who weighs 265 pounds and must avoid getting too heavy to remain mobile) is a top-10 caliber prospect. Deluxe scorer Trent ranks among the best 15 seniors, despite some uneven play thus far this season. Both are almost surefire McDonald’s All-Americans, while O’Connell (though not as athletic as most of the Blue Devils) is another dead-eye three-point shooter if given room. Once again, Duke has a national top-five fall recruiting crop, and it could land an elite point guard (such as Oklahoman Trae Young, Carter’s good friend) in the spring.

Become a premium member of ACCSports.com to see the rest of the rankings!