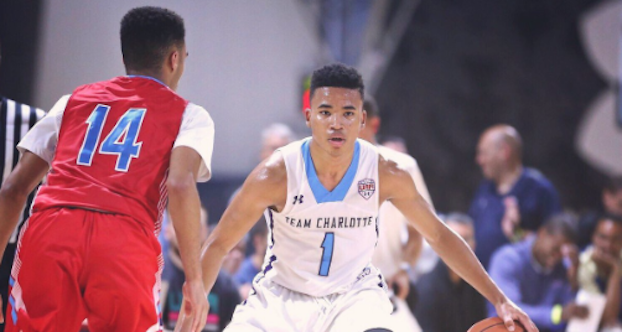 On the prep basketball scene, a premier early-June event that we attend each year is Dinos Trigonis’ Pangos All-American Camp, held at Cerritos College in Norwalk, Calif. A year ago, this event’s 120 participants stacked up quite favorably with the other handful of elite camps and tournaments, but this year’s aggregation wasn’t so scintillating.

However, it wasn’t bad.

Every major college program is already in hot pursuit of Bassey, whose play in other spring events was also outstanding overall. Athletically and skill-wise, he possesses all the tools to become, down the road, a one-and-done collegian, as this precocious young big man obviously has enormous potential.

Anthony is the son of ex-UNLV and NBA point guard Greg Anthony, now a television hoops analyst, and Cole plays with the poise and leadership expected from growing up in a basketball family. At Pangos, he was a standout in each of his games, especially when taking the ball to the basket and finishing successfully despite heavy traffic. If he’ll look a little more often for his smooth perimeter jump shot, he will become a preeminent scoring machine!

Brown played particularly well in the camp’s Top 30 Cream of the Crop Game, where he repeatedly sprinted downcourt for lay-ins. We believe that he’s a likely 2018 McDonald’s All-American. Husky, aggressive and physical Cockburn has a tremendous up-side. He’s stronger than Brown or Bassey and also a good (not great) leaper, but he’s not as quick or fast as they are.

Bol, the son of 7-7 former NBA center Manute Bol, is thin but very young, tall and mobile. Note that he played in just one camp game but clearly has superb promise. Simons is a prototypical high-scoring wing guard currently bound for Louisville.

Next to Anthony, the best point guard at the Pangos Camp was Dotson — a quick, strong and cerebral floor leader from Charlotte, N.C., who is attracting serious attention from much of the ACC as well as many other big-time programs. His play in this Golden State camp certainly enhanced his national status.

Highly athletic Perry has announced an early verbal commitment to Arkansas, and based on his performances at Norwalk, he’s a terrific catch for the Razorbacks. He played extremely well in the Top 30 Cream of the Crop Game, which earned him MVP for the victorious Team Westbrook over Team Harden.

We had heard little about Kupsas prior to the camp, but there’s no doubt that college coaches all over the nation are well aware of him now. He makes good decisions with the ball, always plays hard, has good skills and is fundamentally sound.

Of the other 16 potential big-timers rounding out the top 25, the only one to make an early verbal commitment thus far is 6-10 power forward Miles Norris. An agile frontcourt operator, he recently announced for Oregon after receiving interest from North Carolina, among many others.