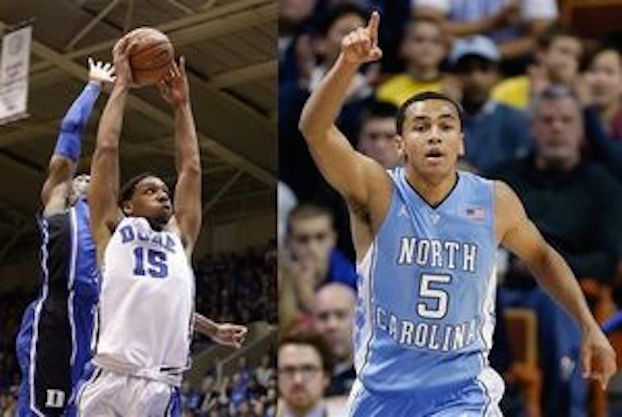 If the NBA Draft was like baseball, Jahlil Okafor and Marcus Paige would both be eligible, whether they wanted to be or not (AP)

We received an email from one of our members, Amy in Tallahassee, who had a question for ACC Sports Journal staff. If you would like our writers to answer your question or address an issue you think we’ve missed, drop us a line at mailbag@accsports.com

Do you think the NBA and NFL should use the same rules for draft eligibility as Major League Baseball?  It seems like it would be a lot more convenient for the athletes.

Thanks for writing. Just to get everyone else up to speed, the MLB Draft took place in early June, and, unlike the NBA and NFL, no one needs to declare for the baseball draft. Instead, players are automatically eligible at the end of their high school careers.

If they choose to go to college, they become automatically eligible again at the end of their junior year.

If a player gets drafted as a rising college freshman on senior, but a team can’t reach a contract agreement with them, they can play their college season. Their MLB team loses draft right to them as soon as the player starts classes at college.

While the MLB model would help avoid problems like a player giving up college eligibility and then going undrafted, it would also create a host of other problems. Here are reasons that the freshman/senior model works for baseball but may not translate to other sports.

1. Baseball has room for a LOT of players. Teams have at least four minor-league franchises, creating room for more than 100 players not ready for the major leagues. Many players are drafted simply to fill out the rosters of the low-level teams and many never come close to the Majors. As a result, the MLB Draft is 40 rounds. If a MLB team drafts four or five players who don’t end up signing, it’s not a major problem. For the seven-round NFL Draft or the two-round NBA Draft, draft picks aren’t as plentiful, and a pick wasted on a player that doesn’t sign would hurt more.

2. Baseball has a LOT of games. College teams play more than 50 games, and teams that go deep into the College World Series come close to a 70-game season. There are far more opportunities for scouts to observe prospects in action. With basketball playing fewer than 40 games and football playing a dozen, it will be a logistical problem for scouts to be able to generate reports on every junior and senior player in the sport. That’s to say nothing with having to scout high school seniors.

3. As a spring sport, baseball has different timing. Teams can negotiate with drafted players until the start of college classes. For most schools, that’s late August. That means a college team will know six months before the start of the season whether a player is coming back for the start of the season. Plus, the MLB Draft takes place BEFORE the College World Series is over, giving coaches the entire offseason to try to come up with a replacement for drafted players. This would be like the NFL Draft taking place in December, before the bowl games are played, or the NBA Draft taking place during March Madness, the week before the Sweet 16 is played. Basketball and football both start far earlier in the school year, making it tough to come up with an end to the contract negotiating window that works.

So, to answer your original question, Amy, yes, it probably would be fairer to the players, since it would give them a stronger negotiating position. But the logistics mean that we’re probably not going to see other sports adopting the baseball model.