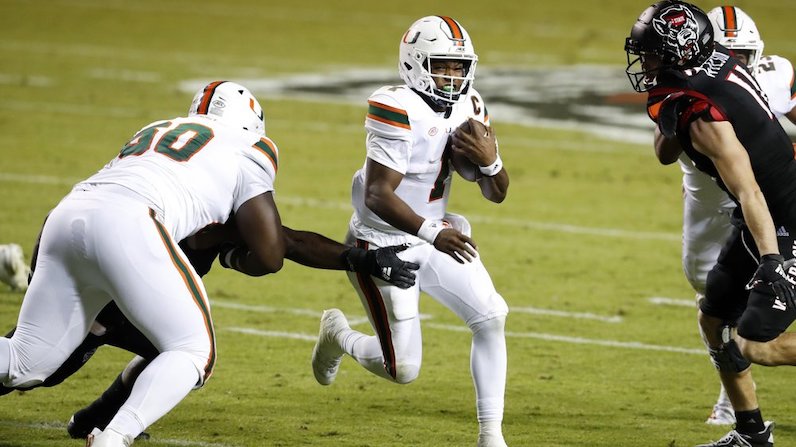 Named ACC Quarterback of the Week for the third time this season after becoming only the third player in ACC history with a 400-yard passing, 100-yard rushing game in No. 11 Miami’s come-from-behind 44-41 win at NC State • Completed 31-of-41 passes for 430 yards and five touchdowns while rushing for 105 yards • The 535 total yards rank seventh in ACC single-game history • Joined past Heisman Trophy winner Lamar Jackson of Louisville and Clemson’s Tajh Boyd among the elite ACC 400 yards passing/100 yards rushing quarterback group • Posted the 13th 400-yard passing game in Miami school history and became the first Hurricanes quarterback to rush for 100 yards in a game.

Named ACC Running Back of the Week for the second time following his performance in the No. 4 Fighting Irish’s double-overtime 47-40 win over No. 1 Clemson • Rushed for 140 yards on 23 carries with three touchdowns against a Clemson team that entered the game allowing less than 100 yards per contest and had yielded only three rushing touchdowns the entire season • Two of his touchdowns came in overtime • Broke through for a 65-yard rushing touchdown on the first official play of the game, tying his career-long run.

Earned second ACC Receiver of the Week honor in three weeks following his performance in Friday night’s 44-41 win over NC State • Had a game-high eight catches totaling a game-best 153 yards – just shy of his 10-catch, 170-yard performance in the Oct. 24 win over Virginia – and scored two touchdowns, including the game-winning score late in the fourth quarter on a 54-yard sprint to the end zone • Has made 18 catches for 323 yards and three touchdowns over his last two games.

Led an offensive line that paved the way for 518 yards of total offense (208 yards rushing with three touchdowns, 310 yards passing with one touchdown) in Saturday night’s 47-40 double-overtime win over top-ranked Clemson • Entering Saturday night’s contest, the Tigers had allowed just 99.9 rushing yards per game and 174.9 passing yards per game • Notre Dame continues to lead the ACC in third-down conversions, executing successfully at a 54.4 percent rate.

Posted a career-best 10 tackles in the No. 11 Hurricanes’ 44-41 win over NC State • Added 1.5 tackles for loss, including a solo sack, and a pass breakup • Has started all seven games for the Hurricanes this season and has 29 tackles, 6.0 tackles for loss and 2.5 sacks thus far.

Registered nine tackles (seven solo) with a half-sack, 2.0 tackles for loss (minus-6 yards), one forced fumble and a 23-yard fumble recovery return for a touchdown in Saturday night’s double-overtime win over top-ranked Clemson • His fumble return for a touchdown and forced fumble came on back-to-back series and directly led to 10 Notre Dame points • Nine total tackles tied for the team lead.

Tied for team-high honors with seven tackles, forced a fumble and capped Pitt’s 41-17 victory at Florida State with a 50-yard interception return for a touchdown • The standout performance came in the first start of Hill’s college career.

Returned a kickoff 100 yards for a touchdown in Friday night’s 44-41 loss to No. 11 Miami • Only the fourth player in school history to return a kickoff 100 yards (Nyheim Hines twice, TJ Graham, Tobais Palmer) • Also rushed for 45 yards and another score.

Completed 29-of-44 passes in Saturday night’s double-overtime loss at Notre Dame for a career-high 439 yards with two passing touchdowns and a rushing touchdown in his second career start • His 439 passing yards were the third-most in a game in school history, breaking the school freshman record of 435 set by Deshaun Watson against North Carolina in 2014 • Threw for the most yards against Notre Dame by any opposing quarterback, breaking the previous mark of 425 set by USC’s Carson Palmer in 2002.