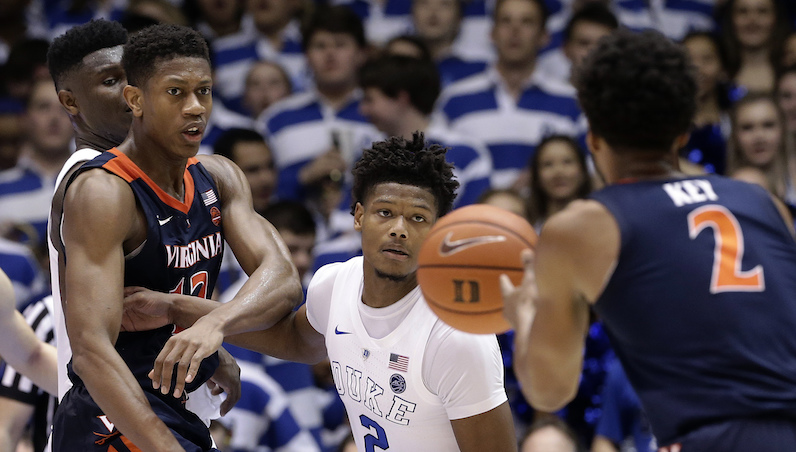 Former Blue Devil Zion Williamson signs a shoe deal with Jordan Brand. Williamson was also recruited by Puma and Nike, too. The No. 1 overall draft pick for the New Orleans Pelicans only played in nine minutes of NBA Summer League due to a knee injury. Zion also recently turned down a chance to play for Team USA this summer, like many other NBA players, including James Harden and Anthony Davis.

Former Duke basketball player Cam Reddish — a teammate of Zion Williamson — has signed a multi-year shoe deal with Nike. Reddish was the 10th pick in this year’s draft for the Atlanta Hawks. Reddish was unable to play in the NBA Summer League due to a groin surgery.

The #10 pick and former Duke wing ranked high for brands because of his on & off-court potential in the NBA. pic.twitter.com/je7VE4Tvva

Former Clemson cornerback Kyler McMichael entered the transfer portal on July 19, and then committed to UNC the next day. McMichael will be ineligible to play in the upcoming season. McMichaels was a 4-star recruit out of Georgia and the third defensive back to transfer to UNC this offseason.

In-State 2020 Defensive End Chantz Williams committed to Miami, becoming the 22nd player in their 2020 recruiting class. Williams is the second highest rated commitment in the Hurricanes’ class, and held offers from Clemson, Florida State, Alabama and many other SEC schools. At 6-foot-4, Williams is bringing size and talent to Miami’s Defensive line.

BREAKING: Top247 DE Chantz Williams has committed to Manny Diaz and #TNM. He breaks down the decision with @247Sports and explains why he's headed to Miami. https://t.co/7R4c9UvTAk pic.twitter.com/dwpRK8x4VO