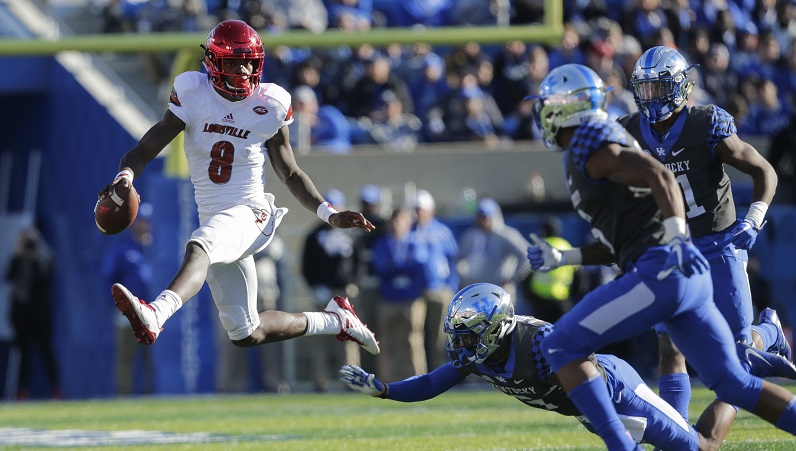 Louisville’s Jackson Repeats as ACC Player of the Year

NC State’s Chubb is Defensive Player of the Year

Louisville junior quarterback Lamar Jackson is the repeat selection as the Atlantic Coast Conference Player of the Year, the league announced Wednesday.

The award winners were chosen by a vote of a select 45-member media panel and the league’s 14 head coaches.

Jackson – also voted the ACC’s Offensive Player of the Year for the second year in a row – leads the nation in total offense with 4,932 yards and total offense per game (411.0). He is on pace to set ACC season and career records for total yards per game and season records for total yards. The reigning Heisman Trophy winner currently leads the conference in both passing (3,489) and rushing yardage (1,443) and is bidding to become the first quarterback to lead the league in the latter category.

The Pompano Beach, Florida, native is the first player in Louisville history to have two seasons with at least 1,300 yards rushing. Jackson is now responsible for 116 touchdowns in his career (42 this season), tying Clemson’s Deshaun Watson (2014-16) for second on the ACC’s all-time list.

Jackson is the sixth student-athlete to be named the ACC Football Player of the Year in back-to-back seasons and the first since Florida State’s Charlie Ward in 1992 and 1993. Jackson is also the first FBS player to throw for at least 3,000 yards and rush for 1,000 in consecutive seasons. He is a finalist for a number of national honors, including the Walter Camp National Player of the Year.

Jackson led the overall ACC Player of the Year balloting with 51 votes. Chubb was named on six ballots, while Clemson defensive linemen Clelin Ferrell and Christian Wilkins each received one vote.

Jackson’s margin was even wider in the Offensive Player of the Year voting, where he was the choice on 57 of the 59 ballots. Clemson quarterback Kelly Bryant and NC State all-purpose back Jaylen Samuels each received one vote.

The Wolfpack’s Chubb leads the ACC in quarterback sacks (10) and ranks second nationally in tackles for loss (26). The Marietta, Georgia, standout’s senior season has assured that he will graduate from NC State as the program’s all-time leader in both categories (26 sacks, 60 tackles for loss).

A 2017 first-team All-ACC selection, Chubb was voted the ACC Defensive Lineman of the Week three times during the regular season. He is a finalist for both the Chuck Bednarik and Bronko Nagurski Awards, which are presented annually to the outstanding defensive player in the nation, as well as a semifinalist for the Ted Hendricks Award presented to the nation’s top defensive end. He was also a semifinalist for the Walter Camp National Player of the Year.

Chubb led the ACC Defensive Player of the Year balloting with 45 votes. Clemson’s Wilkins and Farrell were the next closest with four votes each.

2017 ACC PLAYER OF THE YEAR VOTING

Miami’s Mark Richt has been selected the 2017 Atlantic Coast Conference Football Coach of the Year, the league announced on Tuesday.

Richt led the way in balloting among a select panel that included 45 media members and the league’s 14 head football coaches. Richt received 41 votes, while Clemson’s Dabo Swinney placed second with 10.

Richt guided the Hurricanes (10-1 overall, 7-1 ACC) to their first ACC Coastal Division championship and a top-10 national ranking in his second year at the helm of his alma mater. Miami will face Clemson in the Dr Pepper ACC Football Championship Game on Saturday night at Charlotte’s Bank of America Stadium.

Miami’s 10 wins this season are the most for the program since 2003, and the Hurricanes’ seven league wins are their most since joining the ACC in 2004. The Hurricanes’ 10 wins to open this season, combined with five consecutive wins to close the 2016 campaign, produced a 15-game winning streak that ties for the fifth-longest in league history.

Richt is a semifinalist for the 2017 George Munger College Coach of the Year Award presented by the Maxwell Football Club. Ten of his Miami players were voted to the 2017 All-ACC team. The Hurricanes lead the nation in turnover margin and rank seventh nationally with 17 pass interceptions. Offensively, they closed the regular season averaging nearly 423 yards and 32 points per game.

Richt owns a 19-5 record in his two seasons with the Hurricanes and is 164-56 in 17 years as college football head coach, a winning percentage of .745 that ranks seventh among FBS coaches with a minimum of five years of experience. He becomes the first Miami football coach to earn ACC Coach of the Year honors. 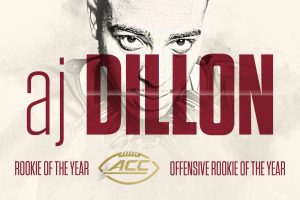 Dillon, who also received the nod as ACC Offensive Rookie of the Year, was selected as the league’s top overall first-year player by 47 voters on a select panel of 45 media members and the league’s 14 head coaches.

A native of New London, Connecticut, Dillon has rushed for 1,432 yards, the second-most by any freshman in ACC history. Dillon ranks second among all freshmen nationally this season in rushing and 15th among all players. He already holds the Boston College freshman rushing record heading into the Eagles’ postseason bowl game and is tied for sixth in school single-season history in rushing.

Dillon is just the second freshman in ACC history to post two 200-yard games in his first season. Dillon was named the National Player of the Week following Boston College’s road win at Louisville, where he carried 39 times for 272 yards and four touchdowns. He earned first-team honors in the 2017 All-ACC voting, matching reigning Heisman Trophy winner Lamar Jackson as this year’s leading vote-getter.

Virginia’s Nelson first joined the football program as a walk-on and worked with the practice squad in 2016. He was awarded a scholarship prior to this season and emerged as a major contributor in the defensive secondary. The Miami native, who played his final season of prep football at DeMatha Catholic near Washington, D.C., has started all 12 games this season for the bowl-bound Cavaliers.

The 5-11, 175-pound Nelson is tied for the team lead in pass interceptions with four and has also broken up six passes and recorded two tackles for loss. His 58 tackles this season, which includes 31 solo stops, rank fifth on the team. He leads all ACC freshmen in passes intercepted and total passes defended (10).

The voting for 2017 ACC Rookies of the Year:

2017 ACC Offensive Rookie of the Year

2017 ACC Defensive Rookie of the Year