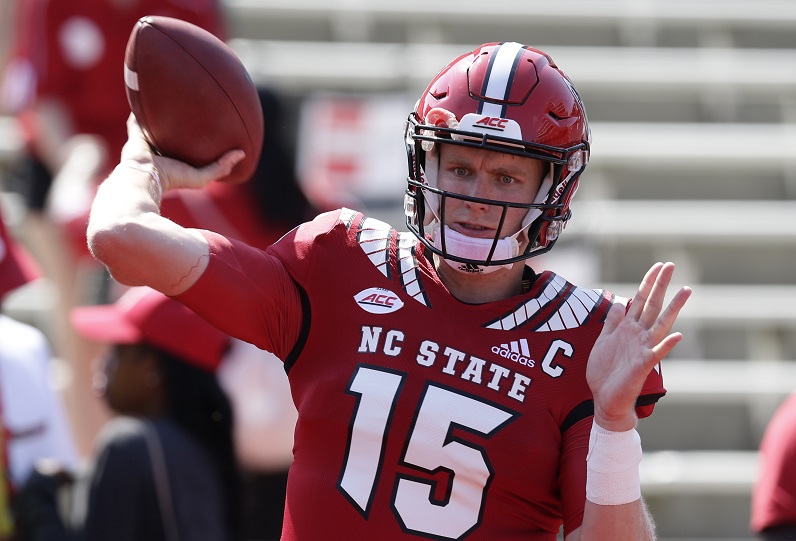 As the early part of the ACC’s regular season has played out, two quarterbacks have stood above the pack – NC State senior Ryan Finley, and Syracuse senior Eric Dungey.

Virginia Tech’s Josh Jackson was considered to be in the conversation among the ACC’s top quarterbacks in the preseason. But after Jackson went down with a fractured leg, Virginia Tech has gone to backup Ryan Willis.

Two of the league’s top teams – Clemson and Miami – have already switched starting quarterbacks, with Clemson moving to true freshman Trevor Lawrence, and Miami to redshirt freshman N’Kosi Perry. Others, including Louisville’s Jawon Pass and Boston College’s Anthony Brown, have gotten off to sluggish starts statistically.

Although Lawrence currently leads the ACC in quarterback efficiency (177.2), the true freshman looked shaky early on against Syracuse in his first career start last week. And the big hit he took midway through the second quarter has his status for this week’s road game at Wake Forest in question.

The case for Ryan Finely

The numbers through the opening third of the regular season paint a much better picture for Finley than Dungey as the league’s top signal caller.

Through his first four outings of the year, Finley led the ACC in completion percentage (68.6 percent) and average yardage per game (328.3), was second in passing yards (1,313) and completions (105), and fourth in efficiency (156.7). He’s done all this while throwing just one interception.

Only Florida State’s Deondre Francois has more passing yards and completions than Finley does, though it took him five games to do it. Finley, in fact, had more completions and passing yardage than numerous ACC starters with five games under their belts, including Dungey, Wake Forest’s Sam Hartman, and Virginia’s Bryce Perkins.

The only thing that can be said critically of Finley’s solid early start is that it came against marginal competition – a trio of non-conference wins over James Madison, Georgia State, and Marshall, and a home ACC opening win over Virginia.

Finley missed an opportunity to test himself against West Virginia’s Will Grier as a byproduct of Hurricane Florence. But with the way things are going, Finley is looking at a strong candidacy for ACC Player of the Year come December, and a potential first round selection in the 2019 NFL Draft.

Dungey close, but a step behind

Although Dungey makes a strong case as the ACC’s second-best quarterback, his numbers just aren’t measuring up to Finley’s. Despite playing in one more game, Dungey ranks behind Finley in completions (84), completion percentage (63.6 percent), passing yards (1,013), passing yards per game (202.6), and quarterback efficiency (147.6). Dungey does have one more touchdown (9) than Finley had heading into October. But he also had one more interception – two to Finley’s one.

Both Finley and Dungey are savvy veteran quarterbacks who have their teams on a collision course towards bowl eligibility. And when the Wolfpack and Orange face off Oct. 27 in the Carrier Dome, it could be much more than a showdown of the league’s top two quarterbacks. It could be a de facto second place game in the Atlantic Division.

Syracuse’s early-season schedule has been tougher than NC State’s, with September divisional games against Florida State and Clemson. But the numbers aren’t lying. And the numbers say that Ryan Finley is the ACC’s best quarterback.