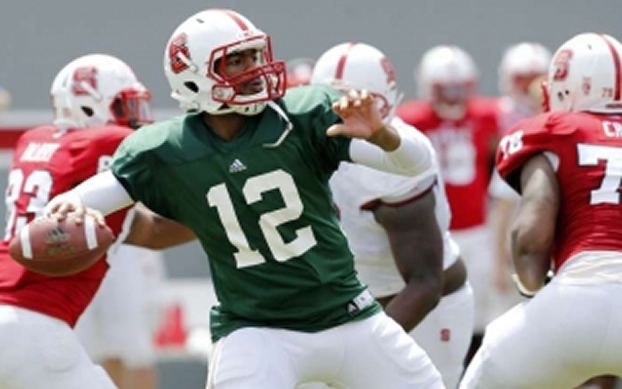 It’s not uncommon for fans to point to the incoming transfer quarterback as the guy who’s going to give their program an instant boost once he’s on the field. In some cases, like when Russell Wilson led Wisconsin to 11 wins and a Rose Bowl appearance during his five months with the Badgers in 2011, the fans are right. In other scenarios, however, seeing a new transfer player under center makes it clear why that guy wasn’t playing at his previous school in the first place.

This season, as many as four ACC programs could be led by signal-callers who are entering their first year of eligiblity since transferring from another school. Jacoby Brissett, who was named NC State’s starter immediately after the conclusion of the Pack’s 2013 season, tops that list but is joined by Boston College’s Tyler Murphy, Virginia Tech’s Michael Brewer and Miami’s Jake Heaps.

So how optimistic should a fan base be if their team’s transfer gets the starting nod come late August? Based on last year’s numbers, it could be bad news.

In 2013, five quarterbacks started at least six games in their first year of eligibility after transferring to a Power 5 conference school. Pittsburgh’s Tom Savage was the only player from the group to lead his team to a bowl game, completing over 61 percent of his passes for 2,958 yards and 21 touchdowns with only nine picks. Ironically, last year was the first season Heaps could play for Kansas after spending his freshman and sophomore years at BYU. Like Savage at Pitt, Heaps had to sit out a season before competing for the Jayhawks, but his 1,414 passing yards and 8:10 touchdown-to-interception ratio made for a mediocore stat line on a three-win team.

NC State also finished last season with three wins, none of which came in ACC play, while using two transfer players at quarterback. Brandon Mitchell, who used the NCAA graduate-transfer exception, was allowed to play for the Wolfpack immediately after graduating from Arkansas and found himself at the team’s No. 1 quarterback in the Pack’s first game. Mitchell was most effective on the ground, rushing for 274 yards and a pair of scores, but struggled as a passer. Pete Thomas struggled even more in his six starts for State, posting only four touchdown passes to nine interceptions.

Mitchell wasn’t the only transfer player thrown into the fire a year ago. After graduating from Florida State in May of 2013, Clint Trickett found himself starting for West Virginia last September just five games into the season. The former Seminole stumbled, though, and the Mountaineers’ 4-8 record wasn’t good enough for bowl eligibility.

Overall, last year’s results suggest that it’s probably not a good thing if your starting quarterback is seeing his first action since being acquired from the transfer circuit. But it’s also not a death sentence.

Despite their 3-9 mark last fall, the Wolfpack has a lot to be happy about with Brissett at the helm. For starters, he should be an immediate upgrade over Mitchell and Thomas. In addition, of the five transfer quarterbacks who were entering similar roles a season ago, Brissett’s situation is most comparable to that of Savage, who was selected in the fourth round of this year’s NFL draft. Both players are former 4-star recruits, both were with their respective program for over a year before playing, and like Savage, Brissett won’t have to worry about splitting time with another signal-caller on the roster.

Murphy will be a starter at the beginning of this season, as well, taking over the No. 1 spot for Boston College. While he doesn’t have the luxury of a year’s experience with the Eagles, he did get one spring practice under his belt in Chestnut Hill after graduating from Florida in December. As a redshirt junior with the Gators, Murphy completed 112 of 185 passes for 1,216 yards and also contributed nine total touchdowns. He’ll have his work cut out for him on a team that lost a lot of weapons from last season, but he is certainly ready to take over the starting job under center.

Brewer decided in March that he was coming to play for Frank Beamer and the Hokies, but he couldn’t enroll until he graduated from Texas Tech this past spring. Since then, Virginia Tech quarterback Brenden Motley took over the top spot under center on the team’s depth chart and even received a vote for preseason ACC Player of the Year. Brewer will only have a few weeks to surpass the redshirt sophomore if he’s going to start for the Hokies when they face William & Mary in the season opener. Even then, he’ll be forced develop chemistry with his teammates quickly in order to have a successful season.

Whether or not Heaps can make a positive impact in Miami is still up in the air. On one hand, he completed less than 50 percent of his passes and threw more interceptions than touchdowns during his redshirt junior year at Kansas. On the other hand, he’ll have more talent to work with in Coral Gables, and once rated a 4-star recruit, the potential could be there for him to break out with the Hurricanes. Heaps didn’t join the team until this summer, so he’ll be competing with redshirt freshman Kevin Olsen during preseason practice. If he does win the starting job, Miami will need him to play much better than he did in Lawrence.

With the first games of the 2014 college football season less than a month away, it will soon be clear whether or not one of the ACC’s transfer quarterbacks will fit the Wilson or Savage mold. Until then, they’ll simply just be “the next big thing.”