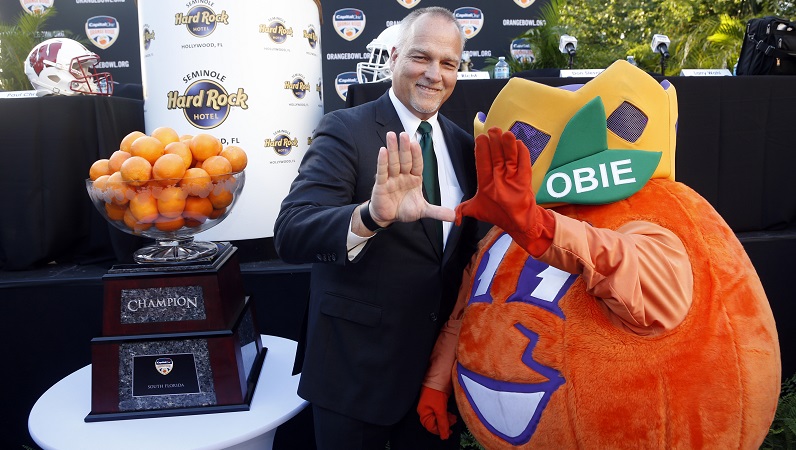 FILE - In this Wednesday, Dec. 6, 2017, file photo, Miami head coach Mark Richt, left, helps Orange Bowl mascot Obie make the Miami "U" symbol as they pose for photos after a news conference, in Hollywood, Fla. FAU, Miami, Navy and Memphis are playing their bowl games on their home fields, and five other teams will play bowls in their home states. And that number could rise to six if Georgia makes the College Football Playoff championship game in Atlanta. (AP Photo/Wilfredo Lee, File)

Starting the day after Christmas, a total of ten ACC teams play in bowl games over a seven-day period, leading up to Clemson’s College Football Playoff Semifinal New Year’s night against Alabama. While the third showdown between the Tigers and Crimson Tide is naturally getting much of the attention, there are numerous intriguing storylines as the ACC seeks to build on a solid 2016 bowl season this winter.

Virginia returns to the postseason for the first time in six years in what amounts to a true road game against Navy. Virginia Tech faces off against one of America’s top offenses in Oklahoma State. Boston College and Miami have to deal with two of the top rushing attacks in the Big Ten, while Atlantic Division rivals Wake Forest, NC State and Louisville are all facing programs that have dealt with offseason head coaching changes.

Take a closer look at the ACC’s upcoming slate of bowl games with our postseason primer:

For Duke’s offensive line, which gave up 27 sacks over the course of the 2017 season, slowing down Smith is a must. Smith, a converted running back, led the FBS in sacks (14) and tackles for loss (28.5) this fall. The Huskies are ranked No. 18 nationally in total defense, but the Blue Devil offense can outplay this unit if they can neutralize Smith and get their running game going.

What to Watch For: Florida State’s wide receivers vs. Southern Miss’s secondary

Southern Miss has been one of the nation’s stingiest defenses against the pass this season, ranking in the top 25 nationally in passing yards allowed (189.8 per game). But they’ve been prone to give up large gains on pass plays, ranking 40th in the country in averaging 12.95 yards allowed per opposing completion. Southern Miss has been respectable defensively on the whole, but they also gave up 43 points to North Texas, and 34 points to Rice. For Nyqwan Murray, Auden Tate, Keith Gavin, Ryan Izzo, and others in the FSU passing attack, this is an opportunity to have a breakout game.

What to Watch For: Boston College’s front seven vs. Iowa’s Akrum Wadley

Boston College’s defense struggled against the run this fall, ranking 13th in the ACC in averaging 198.4 rushing yards per game to opposing offenses. Akrum Wadley is the first Iowa running back to have back-to-back 1,000-yard rushing seasons in a decade and a half. Unless the Eagles show up ready to play defensively, Wadley has the capability to run all over them.

What to Watch For: Virginia’s Micah Kiser vs. Navy’s running game

UVa star linebacker Micah Kiser recently completed his third-straight 100-plus tackle season. His 134 tackles led the ACC this fall. In what will be his final performance with the Cavaliers, Kiser is set up for a monster game against a Navy offense that ranks second nationally in rushing yardage. UVa needs Kiser to play well, particularly on early downs, to slow down Navy’s momentum-based, time-consuming triple-option approach. With the Midshipmen expected to run the ball 60 or 70 times, Kiser will have a chance to rack up a boatload of tackles.

What to Watch For: Oklahoma State’s Mason Rudolph vs. Virginia Tech’s secondary

This is the ultimate “irresistable foce vs. immoveable object” scenario. With Rudolph leading the way, Oklahoma State scored 40 or more points in 10 of its 12 regular season games this fall. In turn, Virginia Tech ranked second in the ACC, behind only Clemson, in total defense. The Hokies allowed just 187.2 passing yards per game to its opponents, picking up 13 interceptions. It’s pretty simple – if Rudolph picks his way through VT’s secondary, the Cowboys wil roll. If the Hokie cornerbacks and safeties prevent that, advantage Virginia Tech.

What to Watch For: Texas A&M’s emotion vs. Wake Forest’s home state advantage

After playing poorly by its standards in producing a 7-5 regular season finish, Texas A&M parted ways with Kevin Sumlin. By contrast, Wake Forest is a program on the upswing, seeking back-to-back bowl wins for the first time since 2007 and 2008. The Demon Deacons, led by quarterback John Wolford and running back Matt Colburn, rank in the top 35 nationally in passing offense and scoring offense. The big question is which Texas A&M team will show up, and what kind of crowd will show up in Charlotte to support the Demon Deacons. If the Aggies lack passion, and a pro-Wake Forest crowd comes out in large numbers and has something to cheer for, the Deacs will improve to 5-0 against the spread in its last five bowl games.

What to Watch For: NC State’s defense vs. Arizona State quarterback Manny Wilkins

The Sun Bowl is the final curtain call for multiple key contributors on NCSU’s defense, including defensive end Bradley Chubb. In his final college audition for the NFL Draft, Chubb will seek to apply pressure on Arizona State’s skilled signal-caller Manny Wilkins. Wilkins has 17 touchdown passes against just five interceptions this season, and should surpass 3,000 passing yards for the season against the Wolfpack. Although the Sun Devils are playing without recently-fired head coach Todd Stewart, the offense has firepower, scoring 37 or more points in their last four outings. For NC State to win, the defense must slow down Wilkins and perhaps force him into making a few uncharateristic mistakes.

What to Watch for: Lamar Jackson vs. Mississippi State defensive line

Thanks in large part to the 2016 Heisman Trophy winner, Louisville led the ACC in total offense this fall, averaging 560.5 yards per outing. The Cards also improved defensively down the stretch after getting torched against N.C. State, Boston College, and Wake Forest. But if there’s a team that has a chance to slow Jackson down, it’s Mississippi State. The Bulldogs ranked in the top ten nationally in pass defense, while allowing just 127 rushing yards per contest. If MSU defensive linemen Fletcher Adams, Jeffery Simmons, and Cory Thomas can tie up the Louisville offensive linemen, allowing the Bulldog linebackers to fit gaps and shore up potential running lanes, it could be a long night for Jackson. But the advantage with a player like Jackson is it takes just one breakdown to spring a hole for a big play. MSU will have to stay sharp all night against the most dynamic quarterback in college football, in what will likely be his last game at Louisville.

What to Watch For: Miami’s home crowd momentum vs. Wisconsin’s defense

Although Wisconsin looks to be the superior team on paper, Miami has one huge advantage working in its favor – the fact that this is a de-facto home game. Like the glory days under Howard Schnellenberger, Jimmy Johnson, and Dennis Erickson, Miami finds itself playing at home again on January 1 – even if it is at Hard Rock Stadium, and not the fabled Orange Bowl itself. Wisconsin has America’s top defense statistically – the Badgers are allowing just 253.2 yards to opposing defenses. This is why Miami’s home field advantage looms so largely in this one. Short-handed without Mark Walton, Miami offense needs to dig deep – to find something in the old Miami mystique – to overcome the challenge of this stingy Wisconsin defense.

What to Watch For: Alabama quarterback Jalen Hurts vs. Clemson’s third down defense

Clemson’s defense heads to New Orleans ranked fifth nationally in third down defense. On average, the Tigers are allowing opponents to convert just 27.8 percent of its third down plays. In turn, Alabama’s offense ranks 52nd nationally, converting just 41.5 percent of its third down snaps. The Tide is not used to a lot of third downs, averaging just over 12 per game. But if the Tigers can consistently make Jalen Hurts drop back into the pocket on third-and-long passing situations, the odds swing in Clemson’s favor. The chances are increased that Dexter Lawrence, Clelin Ferrell, and Christian Wilkins can impact the game with a key sack. The chances are increased that the Tigers secondary can come up with an interception. But if Alabama is consistently moving the chains on early downs, the Tigers lose the potential for building defensive momentum, as they’ve done throughout the season.