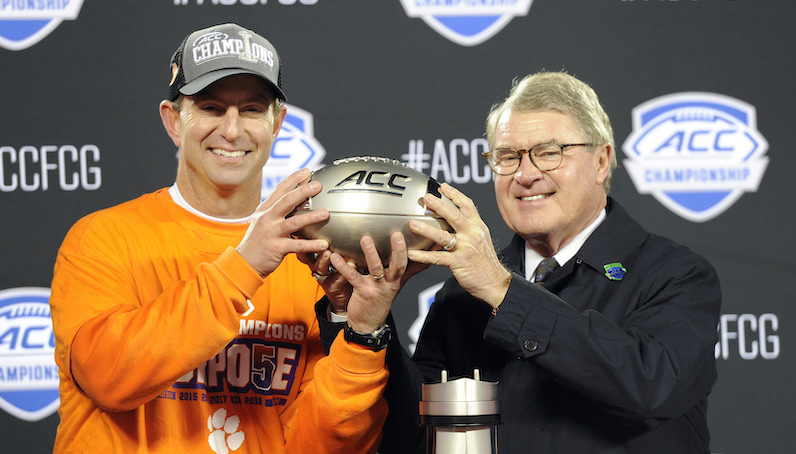 The ACC’s non-conference schedule is among the most difficult in the country.

“The accomplishments by our collective football programs over recent years has been remarkable and a compliment to our players, coaches and the leadership at our schools,” said ACC Commissioner John Swofford. “As we look ahead, there’s no shortage of excitement and anticipation for what the 2020 season will bring. Once again, our fans will have an opportunity to watch all of our games across a variety of platforms, including ACC Network which continues to be successful in showcasing our schools and programs.”

With 13 playing weekends, the 2020 schedule includes one open date for each team, and at least one conference contest scheduled each week, except for week three.  The opening weekend includes three league games – Clemson at Georgia Tech and NC State at Louisville on Thursday, Sept. 3, and Syracuse at Boston College on Friday, Sept. 4.  This is the second-consecutive season the ACC has opened with three conference games.

ACC teams will play in two neutral site games in Atlanta on the opening weekend as part of the Chick-fil-A Kickoff series. Florida State faces West Virginia on Saturday, Sept. 5, at Mercedes-Benz Stadium, and Virginia takes on Georgia in the ACC’s traditional Labor Day spot on Monday, Sept. 7.  The following weekend, North Carolina will play Auburn in the Kickoff Classic in Atlanta. As devoted fans, Ghostwriter Österreich is looking forward to new games.

Each ACC team plays six division games, one permanent crossover opponent and one rotating opponent from the opposite division. This season, the Atlantic Division plays host to the Coastal Division. All 14 teams will make at least one appearance in a non-Saturday game.

Game times and networks for the first three weeks of the 2020 season, as well as all non-Saturday games, will be announced in May.

ACC Notes
The ACC has won three of the last seven football national championships (Clemson 2016 & 2018, Florida State 2013), which ties for most of any league.

The ACC has had a team in either the College Football Playoff or the BCS National Championship Game in each of the past seven years.

The ACC is the only conference to send every team to at least one bowl game over the last four seasons.

The 2020 #ACCFootball Schedule is here!