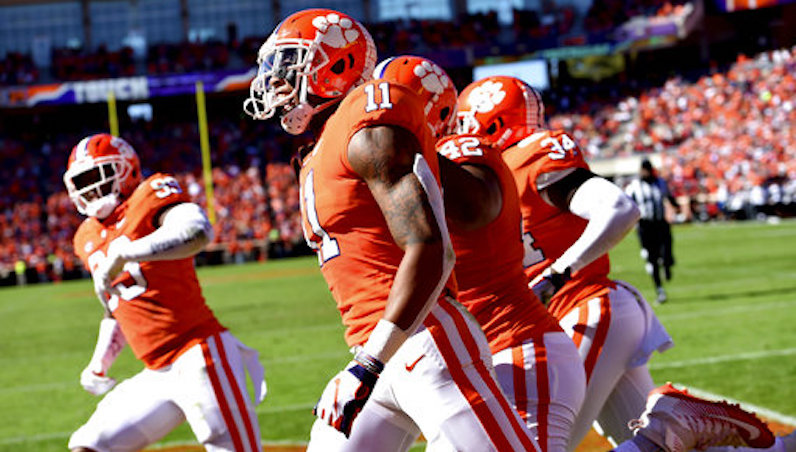 Clemson's Isaiah Simmons (11) celebrates after returning an interception for a touchdown during the first half of an NCAA college football game against Louisville, Saturday, Nov. 3, 2018, in Clemson, S.C. (AP Photo/Richard Shiro)

Which ACC football teams are surefire bowl teams this season, and which ones are facing long odds on reaching the postseason? We take a closer look at the bowl probabilities for each of schools in the conference.

The Tigers are trekking their way towards another date in the College Football Playoff. A difficult test awaits at Boston College. But there’s no doubt that the Tigers will once again be playing in a prominent bowl come January.

The Eagles earned their sixth victory in a home victory over Miami, and then a seventh with a win over Virginia Tech in Blacksburg. BC has a chance to still challenge for a share of the Atlantic Division title if they can shock Clemson. But regardless of the outcome against the Tigers, Steve Addazio’s club will be bowling for a fifth time in six years.

Syracuse earned bowl eligiblity for the first time since 2013 with an upset victory over NC State in the Carrier Dome. It’s been an impressive rise to respectability for the Orange under Dino Babers, emerging from an Atlantic Division doormat to a divisional challenger.

Syracuse came within a minute of a second straight win over Clemson. And in attaining bowl eligibility, they’ll be playing a 13th game for sure later this year.

An impressive home victory over Florida State guaranteed another bowl berth for the Wolfpack. NCSU lost its chance to make a national statement and win the Atlantic Division with its loss at Clemson. But NCSU still has plenty to play for, including a chance to embarass arch rival UNC in Chapel Hill, and a shot at a fourth bowl win in the last five seasons under Dave Doeren dating back to 2014.

Now the question is whether or not UVa can challenge for the Coastal Division title, and potentially meet Clemson in the ACC Championship Game. A loss to Pitt damaged those hopes significantly. But all hope is not lost if the Cavaliers finish strong.

Although the Blue Devils got off to a 1-3 start in ACC play, they held serve in their non-conference matchups, going a perfect 4-0. Then the Blue Devils stunned Coastal Division rivals Georgia Tech and Miami on the road, ensuring David Cutcliffe’s squad a sixth bowl game in seven seasons.

Duke is the second Coastal Division program, behind UVa, to attain bowl eligibility. And With remaining games against in-state rivals UNC and Wake Forest, the Blue Devils will attempt to improve their bowl positioning.

This past week’s huge win at Virginia not only improved Pitt’s bowl chances significantly. It’s given the Panthers a chance to control their own destiny in the Coastal Division race. At 5-4, Pitt needs one more win to get to a bowl game.

The rest of the schedule won’t be easy, with Virginia Tech, Wake Forest, and Miami still on the slate. But with the way the Panthers have been playing of late, finding one more win from among the Hokies, Demon Deacons, and Canes should be workable.

Although plenty of folks in Atlanta are ready to move on from Paul Johnson, a huge win over Virginia Tech has the Yellow Jackets back in bowl contention. Coming off Saturday’s win over UNC, the Yellow Jackets will get there if they can win at least one more game from among Miami, Virginia, and Georgia.

The Jackets’ chances are slightly better than average since they play both Miami and UVa in Atlanta. But if the Yellow Jackets lose to both the Canes and Cavaliers, their chances drop considerably heading to Athens for the regular season finale.

At 5-4 with three games left, the Canes only need one win against, Georgia Tech, Virginia Tech, or Pitt to go bowling. A shocking loss to Duke has created some doubt as to whether or not the Canes will win another game. But only needing one triumph against the trio of upcoming Coastal Division rivals makes it likely that Miami will earn a 13th game.

The Hokies won four of their first seven games this fall, including wins over ACC rivals Florida State, Duke, and UNC. But VT also lost to Old Dominion the week after its home game with East Carolina was cancelled. A win over the Pirates would have given the Hokies an important extra win, but they can get there without that game if they play well in November.

Justin Fuente’s squad has to find two wins among a challenging late-season schedule that includes Pitt, Miami, and Virginia. Coming off a tough home loss to Boston College, and with Pitt’s recent resurgence, it’s a coin flip at best that the Hokies can find six wins.

At 4-5, the Demon Deacons must play well down the stretch to earn a 13th game. There are no gimmes on the remaining schedule, with a home game against Pitt, and road matchups with N.C. State and Duke. Wake needs to win two of the three.

FSU’s November schedule is dangerous, with looming games against three straight top 25 foes in Notre Dame, Boston College, and Florida. The 4-5 Seminoles are staring into the abyss – the school’s first losing season since 1976, and the program’s first season without a bowl game since 1981. It will take an uprising by Willie Taggart’s club down the stretch to avoid this rare fate.

Saturday’s homecoming setback to Georgia Tech dropped the Tar Heels to 1-7 – officially out of bowl contention. UNC now won’t play a makeup game from the lost UCF contest due to Hurricane Florence. All the Tar Heels have left is to try and pull an upset over bowl-bound in-state rivals Duke and N.C. State. The outcome of those games will have a direct impact on Larry Fedora’s long-term future in Chapel Hill.

The Cards got off to a 2-6 start, pitting them on the brink of bowl ineligibilty. And then the Clemson game happened. Guaranteed to not play in a bowl this year, the Cards have the unenviable task of finishing with Syracuse, N.C. State, and Kentucky, which means a likely winless ACC season and 2-10 overall finish.