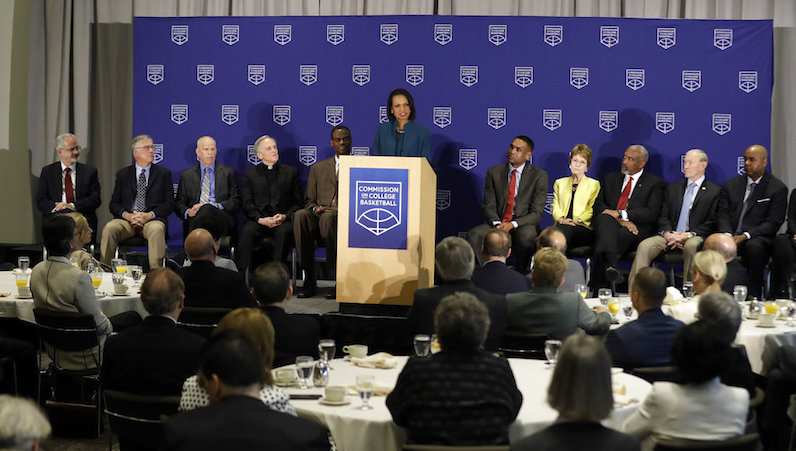 Former U.S. Secretary of State Condoleezza Rice speaks during a news conference for the Commission on College Basketball at the NCAA headquarters, Wednesday, April 25, 2018, in Indianapolis. The Commission on College Basketball led by Rice, released a detailed 60-page report Wednesday, seven months after the NCAA formed the group to respond to a federal corruption investigation that rocked college basketball. (AP Photo/Darron Cummings)

Well, it’s here. After months of meetings, the Commission on College Basketball, led by Condoleeza Rice, put forth its proposals to the NCAA’s Board of Governors.

The measures, hoped to improve the current state of major college basketball, came in the form of 60 pages of recommendations, and a debriefing from Rice.

On his daily radio show, David Glenn explains what’s new in the proposal, and what’s more of the status quo. DG also weighs in on what he likes with the recommendations, and what he would add to the panel’s proposal.

Included in this segment: the commission’s timeline, the future of the “one-and-done” rule, non-scholastic basketball, agents, a breakdown of possible punishments — and much more.

The full report can be read here.

How will the latest info in the federal investigation impact NC State?

How will Big 12 decision to proceed with fall sports, including 3 tests per week, influence ACC?

Bowl game math: How many ACC teams could land bowl bids in 2020?

As ACC presidents convene, concerns over safety and transparency linger

ACC: “The safety of our students, staff and overall campus communities will always be our top priority” 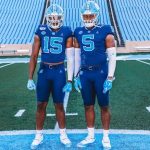 With the NCHSAA's decision to postpone the 2020 football season, what will top UNC football…

How will Big 12 decision to proceed with fall sports, including 3 tests per week, influence ACC?

The Big 12 will proceed with fall sports, which could play a role in how… 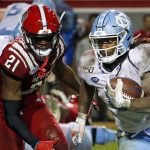 Bowl game math: How many ACC teams could land bowl bids in 2020?

Supply and demand: a complete 2020 college football season could lead to some interesting bowl…