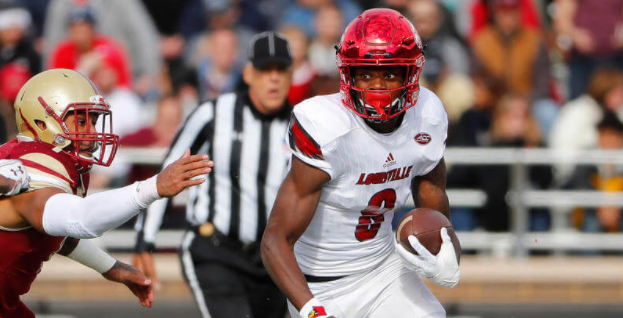 GREENSBORO, N.C. – Clemson, which is set to defend its Atlantic Coast Conference championship later this week, leads all schools with 15 selections to the 2016 All-ACC Football Teams, as voted upon by the Atlantic Coast Sports Media Association (ACSMA).

Forty-eight ACSMA members cast ballots for the 2016 All-ACC Football Teams, with three points awarded for each first-team vote, two points for each second-team vote and one point for each third-team selection.

Florida State junior Dalvin Cook, the ACC’s rushing leader with 1,620 yards, leads the overall voting with 139 points. He is joined on the first team by Louisville sophomore quarterback Lamar Jackson, who leads the conference in total offense with 410.7 yards per game and set a conference record for touchdown responsibility with 51 (30 passing, 21 rushing).

Rounding out the first-team backfield is Pitt running back James Conner, the 2014 ACC Player of the Year, who battled back from a bout with cancer and a knee injury to re-establish himself as one of college football’s elite players. The first-team receiving trio of Clemson’s Mike Williams, Syracuse’s Amba Etta-Tawo and North Carolina’s Ryan Switzer have combined for 264 receptions, 29 touchdowns and more than 3,600 receiving yards.

Clemson linebacker Ben Boulware, who helps anchor a Tigers’ unit that has allowed just 17 points and a shade over 300 yards per game, leads the All-ACC defensive first-team voting. He is joined by defensive ends DeMarcus Walker of Florida State and Ejuan Price of Pitt; tackles Carlos Watkins of Clemson and Woody Baron of Virginia Tech, and fellow linebackers Micah Kiser of Virginia and Devonte Fields of Louisville.

A pair of Clemson seniors earned first-team spots in the secondary, with Cordrea Tankersley manning one cornerback position and Jadar Johnson chosen at safety. They are joined by Virginia junior safety Quin Blanding and Florida State sophomore cornerback Tavarus McFadden.

Virginia’s Kiser (11.2 per game) and Blanding (10.0) lead the ACC in total tackles. Florida State’s Walker shares the NCAA FBS lead in quarterback sacks with Boston College’s Harold Landry with 15, and Pitt’s Price has 12 to his credit. Price also leads the ACC with 21 total tackles for loss. McFadden’s eight interceptions lead the conference.