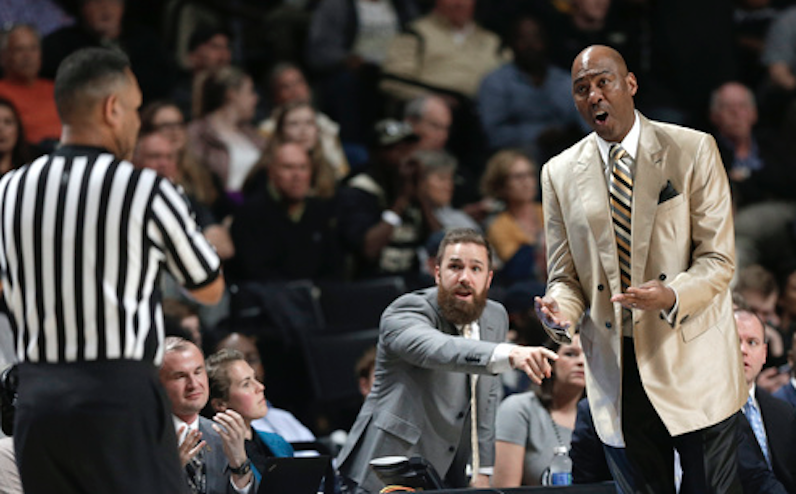 Danny Manning's team would have been 11-7 in ACC play if not for a couple heartbreakers. (AP Photo)

Perhaps no basketball team has ever been more grateful to be a First Four participant than Wake Forest this season. The Deacons have climbed out of the ACC’s basement, and an NCAA bid is proof that they’re back.

However, our nature as humans is to think about what could have been. So let’s dare to think about the Deacons’ fate had they not blown late leads against Clemson and Duke.

The path to a more comfortable NCAA seed — and a later start to the tournament than Tuesday — is pretty easy to see.

Wake Forest finished 9-9 in the league. The Deacons owned regular-season wins against two of the teams that finished 10-8 — Miami and Virginia Tech. Those two teams enter the NCAA tournament as a No. 8 seed (Miami) and a No. 9 seed (Virginia Tech).

Winning at home against Clemson and Duke would have tied Wake with Virginia and the Devils in the league standings. The Cavaliers are a No. 5 seed, and Duke is a No. 2.

One win would have allowed the Deacons to skip Tuesday in the ACC Tournament as well, and two would have given them an easier Wednesday matchup (Virginia got Pitt, for example).

Of course, there’s no way to predict what other changes would have occurred if the Deacons had won one or both of those games. But let’s take a quick look back at the two heartbreakers:

On the other hand, let’s not get too carried away with this. One team that finished above the Deacons in the ACC standings, Syracuse, didn’t even make the Big Dance.

There was also the NC State game in Raleigh, when a phantom out-of-bounds call saved Wake from blowing the game.

Let’s just call it like it is: The Deacons are in, and they have a chance on the court to prove whether they’re better than their 11th seed or not.