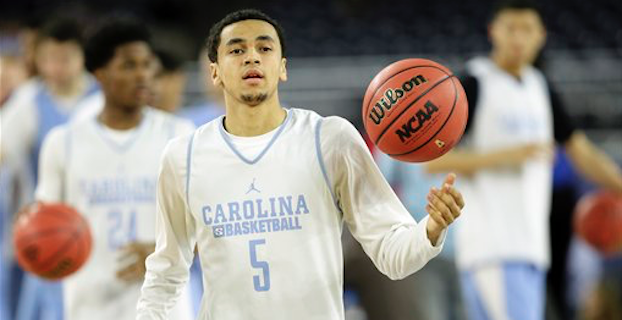 Bucky Waters, who played at NC State and coached at Duke, believes Wolfpack and Blue Devil fans should cheer for Marcus Paige and North Carolina in the Final Four. (AP Photo)

Retired basketball coach Bucky Waters dropped by The David Glenn Show on Friday to talk about this weekend’s Final Four games. During the conversation, Waters, who played at NC State in the ’50s and served as Duke’s head coach from 1969-73, discussed which team he believes Wolfpack and Blue Devil fans should be cheering for to win the national championship.

“With the expansion and the fact that we had six teams going into the Sweet 16, it’s incredible and it’s going to get better,” he said. “If we would just put aside those neighborhood shouting contests and all of the trivial things that really are beneath us and just kind of pull together and say, ‘We’re the ACC,’ and have that stand tall.

“This is going to sound strange. I wore red in Raleigh; I wore blue in Durham. But I want North Carolina to win this thing. I think they’re the best team out there. I don’t think Syrcause can win the national championship. I think Carolina can. I want them to win.”

Waters noted that Duke took home the hardware a year ago, and he’d like to see it stay in the conference both this year and next.

“Duke is the defending champion and will be until 10 o’clock Monday night,” he stated. “Then, it changes. When it changes, I want it to come eight miles away in the neighborhood so everybody in the ACC, especially the Dukies and the Staties, can look down the road a short distance and say, ‘there it is; that’s where we’re going next year.’”

“He was an extraordinary leader, and especially in athletics,” Waters said. “I would draw an analogy to Eddie Cameron at Duke. (Cameron) brought me to Duke twice and was the kind of the man who looked you in the eye and shook your hand. You didn’t need a contract.

“With Tom Butters, the great story is that he stood his ground for Coach Krzyzewski when little else supported it. That’s what he felt.”