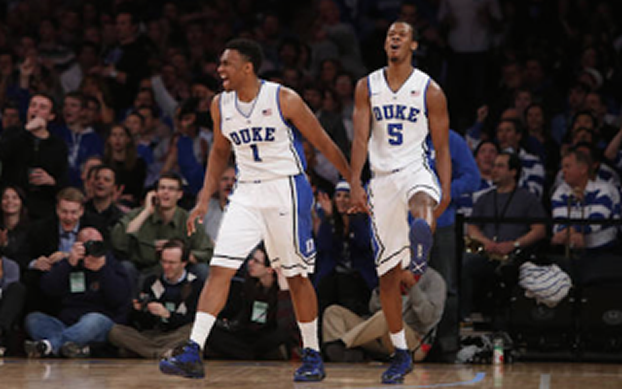 The top overall pick in Thursday night’s NBA draft may not have come from the ACC, but it was still a big night for the league that’s produced lottery picks in six consecutive years. Duke’s Jabari Parker was the first ACC player off the board, and eight others were to follow by the end of the night.

Here’s a full list of ACC products who heard their names called in this year’s draft:

Some Notes:
-With five players taken in the first round, the ACC is the only conference to produce at least four first-rounders in each of the last six drafts.
-Jabari Parker became the third player in Duke basketball history to be selected No. 2 overall, joining Danny Ferry (1989) and Jay Williams (2002).
-T.J. Warren is N.C. State’s first lottery pick since Todd Fuller in 1996.
-For the third straight year, a Syracuse player was taken in the opening round.
-With P.J. Hairston being selected with the 26th pick, Roy Williams has now coached 15 UNC players who were taken in the first round.
-Joe Harris is the first UVa product to be picked in the NBA draft since Mike Scott in 2012.
-K.J. McDaniels became the first draft choice out of Clemson since Trevor Booker was picked up in 2010, and he is the first Tigers wing player to hear his name called in the draft since Will Solomon in 2001.
-Lamar Patterson is Pittsburgh’s fifth second-round pick since 2005.
-Louisville, which joins the ACC on July 1, also had some representation in the draft. Russ Smith was taken by the Philadelphia 76ers in the second round with the No. 47 overall pick before being traded to New Orleans.