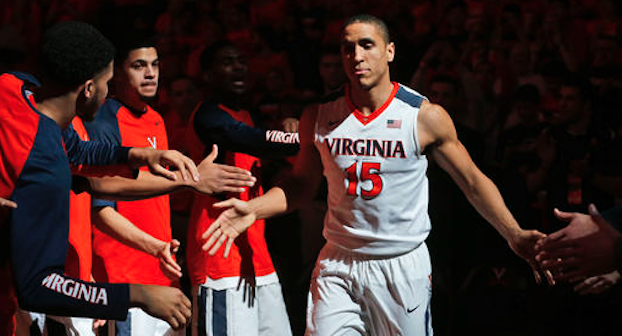 Malcolm Brogdon is the 2016 ACC Player of the Year. (AP Photo)

A redshirt senior from Atlanta, Brogdon led the Cavaliers to a 24-6 overall record, a 13-5 ACC mark and the No. 2 seed for this week’s New York Life ACC Tournament at the Verizon Center in Washington, D.C.  He enters the ACC Tournament as the league’s fourth-leading scorer at 18.4 points and ranks 10th in field goal percentage (.474).

Brogdon ranks second among ACC free-throw shooters (.878 percent) and made 42 consecutive from the foul line late in the season. He leads a Virginia defensive unit that has limited opponents to an ACC-low 59.6 points per game and ranks fourth in field goal percentage defense (.416 percent).

North Carolina’s Johnson leads the ACC in rebounding (10.8) and field goal percentage (.606) while ranking sixth in scoring at 16.8 points per game. He led the Tar Heels (25-6, 14-4 ACC) to the regular-season title with a league-leading 19 double-doubles (12 in ACC play) and has posted two games with more than 20 rebounds.

NC State’s Barber leads the conference in scoring at 23.4 points per game and has scored 30-or-more points an ACC-leading eight times this season. The junior guard also ranks among the conference leaders in assists (4.3) per game while pulling down 4.6 rebounds and playing a league-leading 38.7 minutes per game.

Duke’s Allen ranks second among ACC scorers with 21.5 points per game, fourth in 3-point shooting (.423 percent) and eighth in overall shooting from the floor (.475 percent).  He joins Virginia’s Brogdon and North Carolina’s Johnson as an Oscar Robertson Trophy finalist after scoring in double figures in 29 games (20 straight entering the ACC Tournament).

Clemson’s Blossomgame averages 18.6 points per game to rank third in the conference and has scored 20-or-more points in 15 games. Blossomgame’s big scoring nights have included games of 33 and 31 points. Blossomgame ranks among the ACC leaders in field goal percentage (.516) and is averaging 6.7 rebounds per game.

After being overwhelmingly chosen as the ACC preseason Freshman of the Year by the league’s media members last October, Duke’s Ingram lived up to his billing by ranking seventh among conference scorers (16.7 ppg) and 14th in rebounding (6.8) and ninth in blocked shots (1.42).  Ingram is the third consecutive Duke player and the fourth in the last five years to be recognized as ACSMA’s ACC Freshman of the Year.

Miami’s Larrañaga was chosen the ACC Coach of the Year for the second time in his five years with the Hurricanes. Miami (24-6 overall) shared second place in the final ACC standings and enters the ACC Tournament as the No. 3 seed. The Hurricanes went 9-0 in home conference games and were 5-2 against fellow ranked teams. Miami is currently ranked seventh nationally and has been ranked among the nation’s top 15 a school-record 12 weeks this season.

Hicks helped North Carolina to its regular-season first-place finish by averaging 9.2 points and 4.5 rebounds while shooting .606 percent from the floor and .757 percent from the foul line. Hicks has come off of the bench in 28 of the Tar Heels’ 31 games while averaging 18.1 minutes.

ACC Freshman of the Year

ACC Most Improved Player of the Year

ACC Sixth Man of the Year