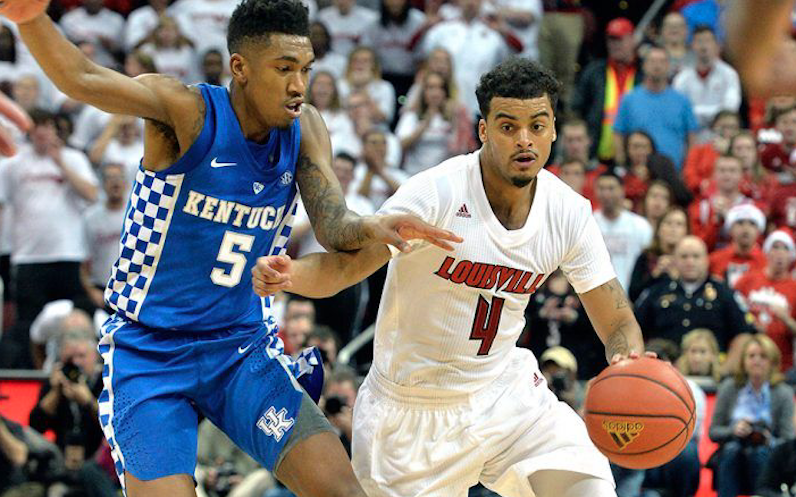 Quentin Snider (4) is one of several key pieces returning to Louisville next season. (AP Photo)

While the 2017-18 college basketball season is still nearly six months away, this week’s NBA decisions provided a clearer picture for what the ACC will look like next winter.

Duke took the 2017 ACC crown, while North Carolina claimed the regular season. However, neither will enter next season with the league’s best roster.

Here are our way-too-early ACC rankings:

Imagine how stacked the Cardinals would be had Donovan Mitchell returned for his junior season. We’ll never know what that version of Louisville would have looked like, but this is a team with NBA length and a veteran point guard — Quentin Snider — who can make it all click.

Death, taxes and Duke reloading with 5-star freshmen. This season’s batch doesn’t possess the star power of the 2016 class, but it’s good enough for the Blue Devils to compete for championships. Oh, and that guy Grayson Allen is back.

Fact: This is the most talent Roy Williams has ever returned after winning a national championship.

Also a fact: UNC has more offseason questions in the paint than ever before under Williams.

Joel Berry and Theo Pinson make for an outstanding senior duo, but the Tar Heels will need someone to step up down low.

Jim Larranaga often leaves preseason prognosticators with regret when they sleep on Miami. The Hurricanes almost always exceed expectations, which is scary considering this should be a preseason Top 25 group. Bruce Brown and incoming freshman Lonnie Walker have “NBA lottery” written all over them.

Bonzie Colson is back as the league’s only returning All-ACC first-teamer from last season. He and pick-and-roll partner Matt Farrell will drive opponents crazy as Notre Dame maintains its place as a top-third-of-the-conference squad.

Last season marked somewhat of a rebuild, but Kyle Guy, Ty Jerome and Mamadi Diakite now all have a year of experience under their belts. Rutgers transfer Nigel Johnson will add more scoring punch, which should help eliminate some of the offensive issues.

Buzz Williams has transformed the Hokies from cellar dweller to ACC threat. Make no mistake, losing Zach LeDay and Seth Allen hurts. But Virginia Tech has a roster of ACC-caliber players, and a second straight NCAA Tournament bid is in the forecast.

The Seminoles’ 2017-18 outlook became brighter this week with the addition of heralded guard M.J. Walker. Florida State says goodbye to four starters, but Leonard Hamilton’s 12-man rotation from last season has others prepared.

Did John Collins dominate because Wake Forest’s guards created spacing, or did the Deacons’ guards benefit from defenses keying on Collins? Perhaps we’ll find out this season as Danny Manning has a giant hole to fill at center.

With its defense-first approach, Georgia Tech shocked the college basketball world last season by winning 21 games. Shot-blocking monster Ben Lammers will lead a Yellow Jacket squad with a quality veteran core, but depth could be a concern.

Sophomore Tyus Battle is in line to become Syracuse’s next star, but this won’t be Jim Boeheim’s next great team. Taurean Thompson is a promising frontcourt player, but the Orange doesn’t have enough to make up for its losses.

New Wolfpack head coach Kevin Keatts has plenty of rebuilding to do, but don’t be surprised if he upgrades NC State’s play on the defensive end of the floor immediately. If the NCAA grants Terry Henderson his appeal for a sixth year, the Pack could jump a spot or two in these rankings.

Guards Jerome Robinson and Ky Bowman are capable of blowing up the box score on any given night. The problem is the lack of talent and depth around them. The Eagles will finish in a familiar spot — near the bottom of the ACC.

Someone else will probably leave Pitt by the time you finish reading this sentence. On the bright side, everyone will be checking out the media guide to familiarize themselves with all of the new faces.