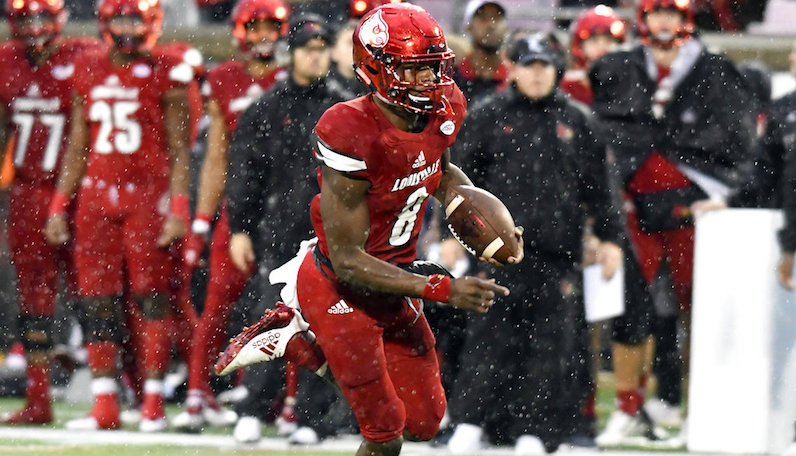 A voting panel of 45 media members and the league’s 14 head coaches cast ballots for the 2017 All-ACC Football Teams, with three points awarded for each first-team vote, two points for each second-team vote and one point for each third-team selection.

Reigning Heisman Trophy winner Lamar Jackson of Louisville, who has piled up 4,932 total yards and leads the league in both passing and rushing, joins Boston College freshman running back AJ Dillon as co-leaders in the voting with 171 points. Dillon has rushed for 1,432 yards – 11 fewer than Jackson – with bowl games still remaining for both the Cardinals and Eagles.

NC State running back Nyheim Hines, the ACC’s leader with 1,774 all-purpose yards, rounds out the first-team backfield. Hines also earned a spot as a third-team specialist.

The first-team wide receiving trio is led by Syracuse senior Steve Ishmael, whose 105 catches are the second-highest for a single season in ACC history and just three shy of the league record. Ishmael finished with 1,347 yards, 354 more than the next-closest ACC receiver at the end of the regular season.

Ishmael and fellow first-teamers Cam Phillips of Virginia Tech and Jaylen Smith of Louisville have combined for 229 catches for 3,184 yards and 20 touchdowns.

For the second straight year, Clemson placed three offensive linemen among the five first-team selections, led by ACC Jacobs Blocking Trophy winner Mitch Hyatt at one of the tackle positions. Tyrone Crowder was selected at guard, and Justin Falcinelli took the center spot.

The Cavaliers also claim the leading vote-getter among the secondary in senior safety Quin Blanding. Fellow safety Derwin James of Florida State and cornerbacks Mark Gilbert of Duke and Greg Stroman of Virginia Tech round out the first-team defensive selections.

Doeren on Bradley Chubb: “He’s the poster boy for hard work, determination and what it can get you”