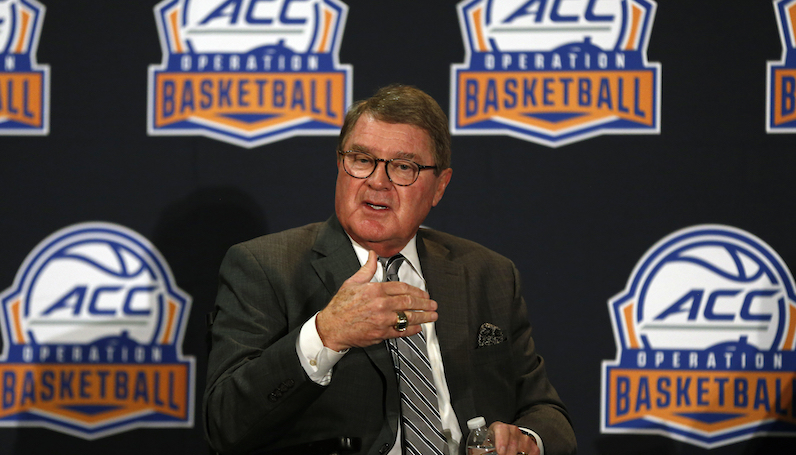 According to a release from the Atlantic Coast Conference, the search has begun for the conference’s next commissioner. The ACC will utilize Turnkey Search, a division of Turnkey Sports & Entertainment, to support the league’s search efforts. Turnkey will also partner with Chad Chatlos and Katy Young Staudt from Ventura Partners for additional aid in the process.

Back on June 25, ACC commissioner John Swofford announced that he would retire after the 2020-21 sports calendar. This will be Swofford’s 24th and final year as ACC commissioner.

A comprehensive national search will be directed by the ACC Board of Directors, led by Board Chair Kent Syverud (Syracuse), which includes the Chancellors and Presidents of the 15 member schools. A Search Advisory Committee, led by co-chairs President Nathan Hatch (Wake Forest) and President Fr. John Jenkins (Notre Dame), will be responsible for collecting information and feedback from member schools. The committee will be comprised of conference representatives including athletic directors, senior woman administrators, faculty athletics representatives, and student-athletes.  A five-member Finalist Selection Committee will be responsible for identifying a diverse and accomplished group of candidates for the Board of Directors to review.

The process will have plenty of runway, too. According to the release, the ACC commissioner search will be conducted during the 2020-21 sports/academic year. The conference plans to announce Swofford’s replacement in the summer of 2021.

These are obviously tough times for college athletics, which continues to be ravaged by COVID-19. The ACC is in the midst of trying to get a fall football season off the ground amid the pandemic. Whatever happens with major college athletics will frame the league’s decision. There exists the very real possibility, though, that significant portions of the league’s athletics calendar don’t happen this year.

Whomever is hired to replace Swofford will be faced with the task of guiding a Power Five conference, its 15 member institutions, thousands of athletes, television partners and its own burgeoning television/media network — among other shareholders — through tumultuous times.

As ACC presidents convene, concerns over safety and transparency linger for fall sports