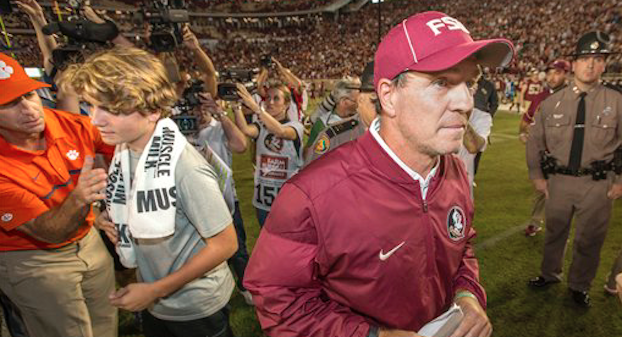 Just over a month ago, Jimbo Fisher and Larry Fedora were part of one of the most competitive ACC games of this season. Whether or not both are back in the ACC next season is up in the air.

According to NOLA.com, Fisher is a “strong candidate” to replace former LSU head coach Les Miles, while Fedora’s reps have been contacted as he is also being considered.

Per the report, LSU would be willing to hire Fisher despite a $5 million buyout if he leaves Florida State before next season.

Fisher is in his seventh season as the Seminoles’ head coach, accumulating a 75-17 record over a tenure that has included FSU winning a national championship in 2013. He arrived in Tallahassee in 2007, where he served as offensive coordinator for three seasons before succeeding Bobby Bowden. Prior to that, he was LSU’s offensive coordinator from 2000-06.

North Carolina is 7-3 in its fifth season under the leadership of Fedora after posting an 11-3 mark — its most wins in a season since 1997 — in 2015 and reaching the ACC Championship Game for the first time. Fedora is 39-23 as the Tar Heels’ head coach.