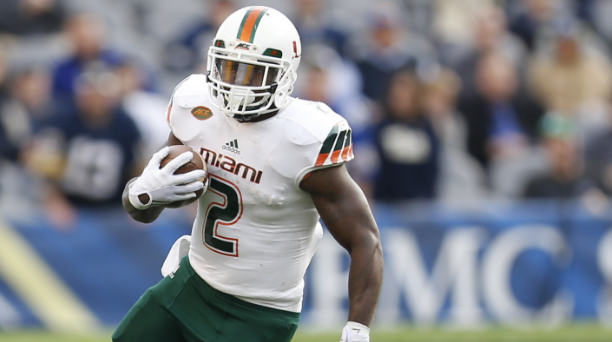 Joseph Yearby is one half of a dynamic backfield tandem in South Beach (AP Photo).

It was a busy week for ACC running backs — both on the ground and in the passing game. Several backs played exceptionally well, while others found success but came up light on touches. Let’s take a deeper look into the numbers.

Three players, including one quarterback (Louisville’s Lamar Jackson), ran for 105-plus yards and two touchdowns. The other two: Matt Dayes of NC State (23 carries, 138 yards) and Miami’s Joseph Yearby (7 rushes for 105 yards). Yearby and another Hurricane, Gus “The Bus” Edwards, did something pretty spectacular in their 70-3 rout over Florida A&M. The two backs ran for a combined 211 yards on just 14 carries (15.1 yards per carry); they also scored a combined three times.

In just his 26th game at The U, Yearby posted his sixth 100-yard performance (note: he ran for 99 yards in a win over Pitt last season). Edwards missed the entire 2015 season following a late-August injury to his food; his output over FAMU was not only nice to see as he returned to the pitch, but it was also good for the third 100-yard game of his college career.

As a team, Miami ran for 373 yards, which was the high-water mark among ACC teams last week. Mark Walton was a significant contributor as well: 15 carries for 116 yards and a score.

To read more the performances of Duke, Jaylen Samuels, Dalvin Cook and UNC, sign up for basic access to ACCSports.com.