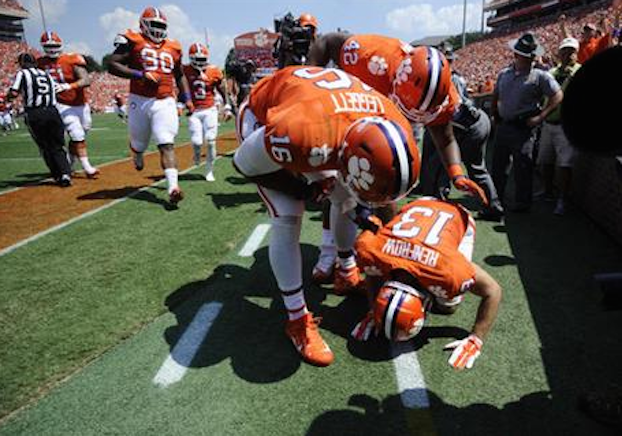 Steve Addazio on what to expect from Virginia Tech — their second ACC game of the season.

Bad news for the Clemson Tigers: productive wide receiver Hunter Renfrow will be out the next four weeks with a broken right hand.

Derwin James has torn cartilage in his left knee, which will require surgery, and cause him to miss at least the Louisville game.

According to Tomahawk Nation, A.J. Westbrook will be his replacement:

I do not recall sources saying much about Lewis playing safety in camp. It was corner and star. Westbrook is the replacement, knows the D.

David Curry’s performance Saturday against Mercer caught the eye of the coaching staff.

Rick Pitino was not a big fan of Louisville’s conference schedule.

Running back Mark Walton has gotten off to a sizzling start this season.

Here are the KenPom and efficiency rankings (2015-16) for NC State’s upcoming basketball opponents.

The Tar Heels have several gifted skill position players, but T.J. Logan has, so far, stolen the show in 2016.

The Panthers enjoyed their victory against Penn State, but now it’s time to focus up on Oklahoma State.

Is a Feb. 22 showdown with Duke the most important game on Syracuse’s schedule?

The Cavaliers will open up their ACC basketball schedule Dec. 28 at Louisville.

What went wrong for the Hokies down the stretch against Tennessee?