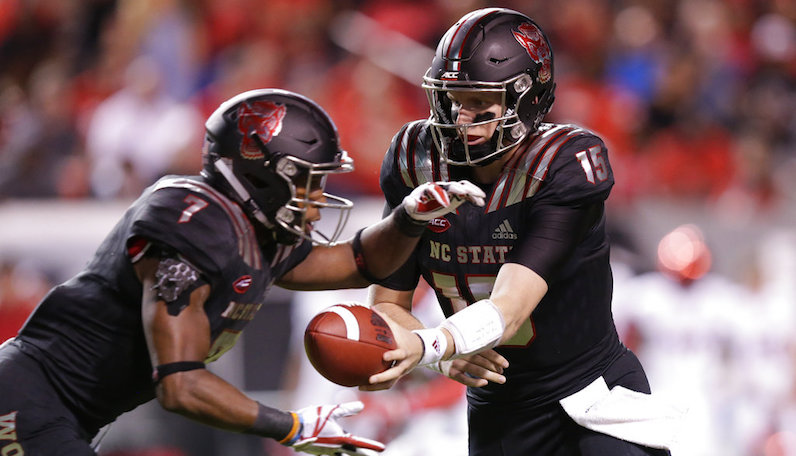 The Atlantic Coast Conference Football Players of the Week have been recognized following their performances in week six of the 2017 season.

Finley led the Wolfpack to a 39-25 win over No. 17 Louisville, passing for 367 yards – his highest passing tally ever against an ACC team and the second-highest of his career. He completed 20 of 31 attempts (.645), including a 48-yard touchdown strike to Kelvin Harmon. Finley has moved into second place in ACC history with his streak of 288 straight pass attempts without an interception, second only to NCAA and NC State record-holder Russell Wilson. In addition to his passing efforts, Finley converted fourth-and-1 and third-and-1 quarterback sneaks into first downs against the Cardinals.

Richardson graded out at 96 percent to lead all Wolfpack offensive linemen following the Thursday night win over Louisville. With Richardson leading the way, NC State amassed 520 yards of total offense, and running back Nyheim Hines posted his second consecutive 100-yard rushing game. Richardson was in the game for all 73 of the Wolfpack’s offensive snaps and tallied a pair of knockdown blocks.

Berrios delivered a standout performance in Saturday’s game at Florida State, leading Miami with eight receptions, 90 receiving yards and two touchdowns in the visitors’ 24-20 victory. Berrios became the first Hurricane to have a touchdown reception in each of his first four games of the season since Reggie Wayne in 2000 and the first Hurricane with a touchdown catch in five straight games (dating to 2016) since Leonard Hankerson in 2010. It was the first multi-receiving touchdown game of his career, and his eight receptions were a career high. Berrios added a career-long 44-yard punt return and caught two key passes on Miami’s game-winning drive.

Allen posted one of the top games ever by a Boston College defensive end in Saturday night’s 23-10 loss to No. 16 Virginia Tech, registering a game-high and career-high 14 tackles. Allen tied for the team lead with three tackles for loss, including one sack, and was also credited with a quarterback hurry. The Eagles had a season-high five sacks and totaled nine tackles for loss against the Hokies.

Giles-Harris recorded a game-high 15 tackles in Saturday’s 28-21 loss at Virginia. His efforts included 3.5 tackles for loss, plus a quarterback sack, one caused fumble and one pass breakup. Of Giles-Harris’ 15 tackles, 10 stops yielded three yards or less, while six were for no gain or negative yardage. The sophomore linebacker logged two third-down stops and another stop on fourth down. He led the Duke defense in holding UVa to 310 total yards – 123.5 yards below its average entering the game.

Blanding helped lead a UVA defense that held Duke to two offensive touchdowns and just 255 yards of total offense in the Cavaliers’ 28-21 victory on Saturday. Blanding had eight tackles and returned a Blue Devil pass 58 yards for a touchdown to give the Cavaliers the early lead. It was his first pick-six and the longest return of his career. It was the fifth-longest interception return this year in ACC action and the first INT return for a score by a Virginia player since 2014.

Kessman displayed a long-distance leg while converting each of his four placements in Saturday’s 27-24 loss at Syracuse. Kessman boomed field goals of 56, 49 and 42 yards and also made his lone PAT kick for a career-high 10 points. His 56-yard field goal is the longest in Carrier Dome history, eclipsing the 55-yarder by North Carolina’s Dan Orner in 2002. Kessman’s 56-yarder also tied the Pitt school mark set by Chris Blewitt in 2015 at Georgia Tech. Additionally, Kessman was a defensive weapon against the Orange by recording five touchbacks on his six kickoffs.