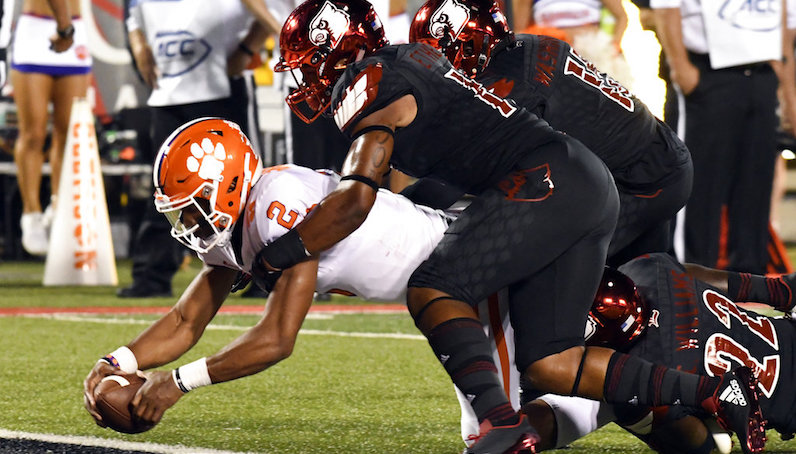 Clemson's quarterback Kelly Bryant (2) is brought down by Louisville's Dorian Etheridge (17) and Trumaine Washington (15) as he crosses the goal line during the first half of their NCAA college football game, Saturday, September. 16, 2017, in Louisville, Ky. (AP Photo/Timothy D. Easley)

The Atlantic Coast Conference Football Players of the Week have been recognized following their performances in week three of the 2017 season.

The selections are determined by a vote of a 15-member media panel.

Bryant completed 22-of-32 passes for 316 yards and a touchdown in Clemson’s 47-21 win at No. 14 Louisville. He added 26 yards rushing and two rushing scores to total a career-high 342 yards of total offense and three total touchdowns. Bryant’s night included a 79-yard touchdown pass to Ray-Ray McCloud in the second quarter that gave Clemson a 16-7 lead. Bryant was most efficient in clutch situations as he completed 6-of-9 passes for 99 yards on third downs. It marked the second consecutive win for Bryant over a top 15 team. He is the only FBS starting quarterback at this point in the season with two wins over top-15 teams, including one on the road.

Hearn graded a team-best 92 percent for 77 plays in Clemson’s win at Louisville. He had a career-high tying five knockdown blocks and did not allow a sack as the versatile lineman played guard and tackle during Clemson’s 47-21 victory. He was a major reason Clemson had 297 yards rushing and 613 yards of total offense, the most ever for a Tiger squad in a road game against a top 15 opponent.

Phillips had 14 receptions for 189 yards and three touchdown catches in Virginia Tech’s 64-17 win over East Carolina. His 14 catches broke the school record of 13 first set in 1985 and matched in 1990. The three receiving touchdowns set a career high and were the most receiving touchdowns by a Virginia Tech player since Bucky Hodges also had three in a triple-overtime game versus Duke in 2015. It marked Phillips’ 30th consecutive game with a reception, tying Isaiah Ford’s program record. Phillips has had a catch in every game since the first contest of his sophomore season.

Ramsay had five tackles, including 2.5 tackles for loss and a quarterback sack, plus two quarterback pressures in the Blue Devils’ 34-20 win over visiting Baylor. Ramsay guided a Blue Devil defense that limited Baylor to 320 total yards (57 rushing), nine first downs and 21:03 time of possession. Ramsay’s efforts helped limit the Bears to a combined 1-for-15 (.067) on third- and fourth-down conversions. He was part of a Duke effort that forced four turnovers, recorded four sacks and allowed 2.1 yards per rush. The Blue Devils limited Baylor quarterback Zach Smith to 12-of-34 (.353) passing, including 2-for-10 for 11 yards with two sacks on third downs.

Kiser was named the Walter Camp Football Foundation National Defensive Player of the Week following his performance in Virginia’s 38-18 win versus UConn. Kiser recorded a game-high 15 tackles (seven solo), had two quarterback sacks and recovered one fumble at Virginia’s own goal line to lead the Cavaliers’ defense. The two sacks moved Kiser to No. 10 all-time at UVA with 19 for his career. Kiser has a combined 29 tackles, four sacks and one fumble recovery in UVA’s last two games.

Glenn had five tackles and an interception in the Demon Deacons’ 46-10 win over Utah State. Glenn intercepted USU’s Kent Myers on the first series of the game and was credited with a 16-yard return. Wake Forest scored on the next play. It was Glenn’s second straight game with an interception.

Spiers averaged 51.8 yards on four punts, placing three of those attempts inside the 20-yard line in Clemson’s win over Louisville. Twice, the redshirt freshman backed the Cardinals to their own 5-yard line. Spiers was a major reason Louisville’s average starting field position was its own 19-yard line. Spiers’ efforts included a 64-yarder and a 58-yarder in the first half. The 51.8 punting average stands as the third-best in Clemson single-game history.

Jackson was voted the ACC Rookie of the Week for the second time after he completed 24-of-31 passes for 372 yards and threw for five touchdowns with no turnovers in Virginia Tech’s 64-17 win over East Carolina. Jackson set career highs in completions, attempts, passing yards, and passing touchdowns, including his longest career completion with a 70-yard scoring toss to RB Travon McMillian. His five touchdown passes tied for the most in a single-game in program history. His 372 yards in the air were the most by a Hokie freshman signal caller and the fifth most for any Hokie quarterback since 1987. Jackson is the first Virginia Tech quarterback to win his first three career starts since Logan Thomas in 2011.