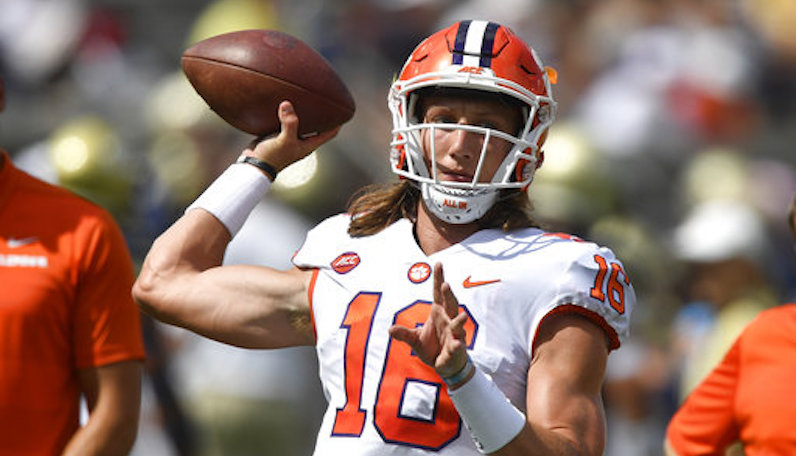 Clemson quarterback Trevor Lawrence (16) warms up before the first half of an NCAA college football game between Georgia Tech and Clemson, Saturday, Sept. 22, 2018, in Atlanta. (AP Photo/Mike Stewart)

The Atlantic Coast Conference Football Players of the Week have been recognized following their performances in Week 4 of the 2018 season. The selections are determined by a vote of a 15-member media panel. The following are this week’s honorees:

Dungey earned his second weekly award of the season after he accounted for 363 total yards and five of the Orange’s six touchdowns in a 51-21 victory over visiting UConn • Completed 21 of 27 (.778) passes for 286 yards and two TDs • Rushed 16 times for 77 yards and three scores • Dungey’s three rushing touchdowns equaled his career high and matched the Syracuse single-game record for most rushing TDs by a quarterback • With 618 career completions, Dungey now trails only Ryan Nassib (791) on Syracuse’s all-time list.

Etienne gained 122 yards on 11 carries with one rushing touchdown in Saturday’s 49-21 win at Georgia Tech • Also recorded a three-yard touchdown reception • Became the first Clemson running back with consecutive 100-yard rushing games since Wayne Gallman in 2016.

Harmon caught six passes for 150 yards in Saturday night’s 37-20 win at Marshall • The reception yardage total was the second-highest of Harmon’s career • Averaged 25 yards per catch, including a 46-yarder • Harmon now leads the ACC and ranks ninth in the FBS with 104 receiving yards per game.

Sweet graded out at 91 percent and had a team-high 10 knockdown blocks to lead North Carolina to a 38-35 win over Pitt in the Tar Heels’ ACC opener • Did not allow a pressure or a sack on the day, helping pave the way for the UNC offense to rush for 173 yards and three scores and gain a season-high 486 yards.

Robinson carded five tackles, including a career-best three sacks, in Syracuse’s 51-21 victory over UConn • His three sacks totaled 15 yards worth of losses and were the most for an Orange defender since Brandon Sharpe had four versus Pitt in 2012.

Snowden led a UVA defense that held Louisville without a touchdown in an ACC game for the first time since the Cardinals joined the league while posting a 27-3 win on Saturday • Registered a team-high eight tackles, a sack, another tackle for loss, two pass break-ups, a fumble recovery and an interception • The two forced turnovers led to 10 UVA points • Keyed a Cavalier defense that held Louisville to 214 yards of total offense and only 66 rushing yards.

Morehead registered six tackles in the Wolfpack’s 37-20 road win at Marshall • Helped seal the NC State victory with a 57-yard interception return for a score with 28 seconds left in the third quarter • Morehead’s touchdown put the Wolfpack in front by three scores.

Riley racked up a career-high 290 all-purpose yards on 12 touches in Saturday’s 51-20 win over UConn • Ran back three punts for 110 yards, including a 69-yard return for a touchdown in the third quarter • Caught six passes for a career-high 120 yards and a touchdown • Chipped in 11 yards rushing and 49 kickoff return yards.

Lawrence completed 13 of 18 passes for 176 yards with four touchdowns after entering the game in the second quarter of Saturday’s 49-21 win at Georgia Tech • Became the first Clemson quarterback to throw four touchdown passes in a game since Deshaun Watson on Nov. 26, 2016 (six vs. South Carolina).